Earlier this year, Facebook did away with FBML, their mark-up language that allowed page administrators to create custom tabs. They replaced that technology with iFrames. After a bit of early scrambling and complaining, brands have realized the power and benefits of using iFrames.

In its purest form, an iFrame is an HTML element that allows you to pull in an HTML document. That probably means little to you. So let’s look at it from a less technical perspective. An occurrence you see every day.

When you view a YouTube video on this website, on Facebook or anywhere other than YouTube, that is done through the use of iFrames. While you may be on a site other than YouTube when you look at the video, the video itself is actually on YouTube. So you are visiting elements of that site without going there.

In other words, an iFrame pulls in content from another site without leaving the current one.

So if you create a tab on your Facebook page and have the use of iFrames, you can pull in content from another website. It can appear seamless — as if the content you are viewing is part of the Facebook page. But it actually comes from somewhere else.

What It Means for You

But even better, you are getting the traffic numbers to your site. Your fans don’t realize they are on your site, but they are. Through the use of iFrames, every time they view one of your framed pages they are adding a page view to your website.

Whatever you can do on your website, you can do within a Facebook iFrame. The sky’s the limit. It could simply be a list of content, or it could be bringing in entire articles. You could run eCommerce through an iFrame, selling products or services. You could use it to tell more about your company, to explain your services. You could frame in contact forms or requests for quotes.

Below is an iFrame that I created that pulls in a page from this website listing the services I provide. As the person clicks through, they can get more information and even complete a form. The entire time, they stay on Facebook, have a seamless Facebook experience, but the pages are actually on JonLoomer.com. 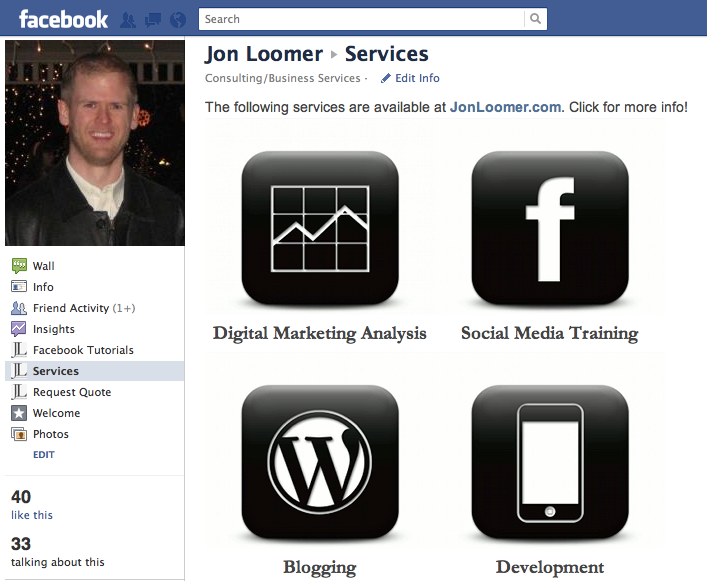 You are limited only by your imagination.

We’ll get to the details of creating iFrames in a future tutorial, but you can’t just frame in your current website and call it good. If you did so, it would include your website’s headers, sidebars and footers. The width would not fit Facebook, so scrollbars would be present. In other words, it wouldn’t be seamless. It would be clear that this content doesn’t belong there.

So you’ll need to do some creative programming. Create pages that have a width of no more than 520 pixels. Make those pages without headers, sidebars or footers. Try to keep the height under 800 pixels. And you’ll also need to make certain that every possible page that can be reached from the entry point contains that same Facebook friendly format.

Third party Facebook applications will entice you with short-cuts. There are times when their product will suffice (an example is the Static HTML Welcome tab). But more often than not, you’re better off iFraming in your own content.

These are important. You’ll often find that third party apps provide a useful service, but they make sure to brand the product to promote themselves. The CSS is also often terrible, and it’s not consistent with your brand. And if you want the best possible product, you typically have to pay for it.

Are third party apps easier? Sure. But if you’re willing to put in the effort to build out iFrames, you own it. You own the content, the traffic and the branding. It’s more rewarding, and it’s simply a better experience for your fans.