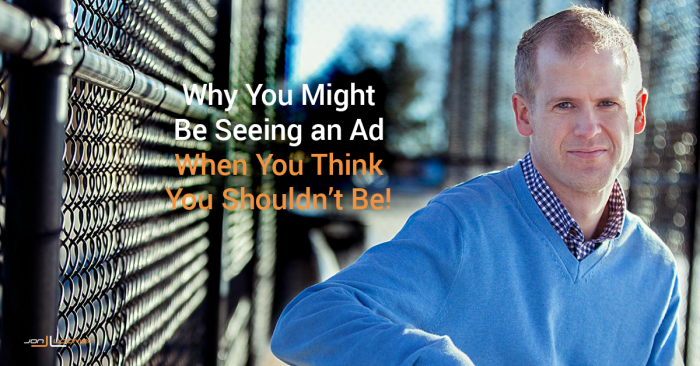 I’ve been running a fun Facebook ads experiment that allows people to “choose their own adventure” with Facebook ads. The campaign works with the help of Website Custom Audiences…

I’m performing a little experiment. Would you like to participate?>> CLICK ON THE IMAGE THAT APPLIES TO YOU AS A…

When someone clicks on the image for “Advanced,” for example, they are adding themselves to one of 31 different “Advanced” Website Custom Audiences. I create a WCA for each of 1-30 days as well as 180 days. Here’s an example of the “Advanced” WCA with a 180 day duration… 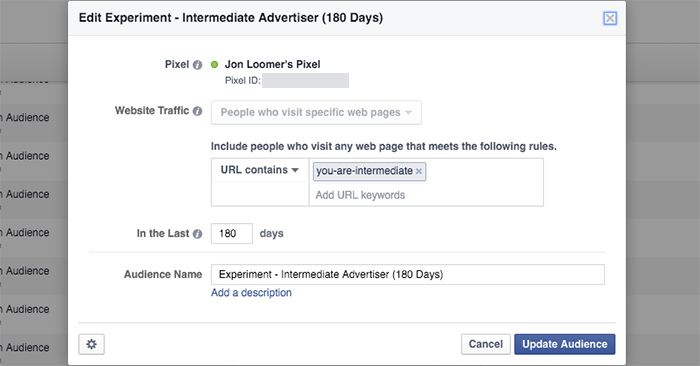 In my invitation ad sets, I exclude anyone who visited any of the three landing pages for Advanced, Intermediate or Beginner during the past 180 days. 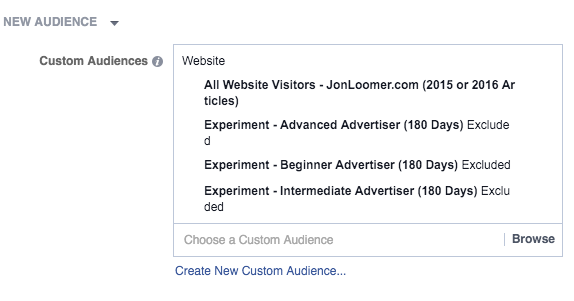 In the example above, I was targeting my website visitors from the past 180 days who read a post from 2015 or 2016 (how I did that is for another blog post!). 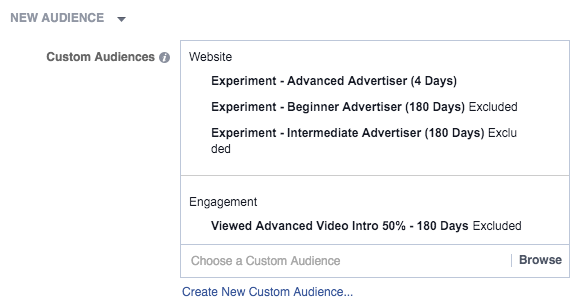 As you can see, I targeted those who visited that “Advanced” landing page during the past four days while excluding any of the intermediate and beginner advertisers. I also excluded anyone who watched at least 50% of the video, so I don’t have to keep showing it to them (I did that using Engagement on Facebook audiences).

To recap: Anyone who clicks one of the Advanced, Intermediate or Beginner links from the invitation ad will be excluded from seeing it ever again. They’ll also then be added to a new campaign to see ads intended for them as advanced, intermediate or beginner Facebook advertisers.

A strange thing happens when you run an experiment like this. The people who participate want to see your ads. As a result, they are paying very close attention to what they see and what they think they shouldn’t see.

But in reality, it can be (and probably is) neither. I can assure you that my settings are 100% correct. I’m confident that Facebook is doing things the way they should be.

Why, then, might people be seeing something when they think they shouldn’t be?

1. You Are Seeing The Ad Organically

I’ve repeated myself so many times on this that if I were saying it out loud I’d be getting hoarse.

I’ve had people tell me that they clicked the link for “Advanced” but they’re seeing the ad for “Intermediate.” Or they already clicked an option, and they’re still seeing the ad (they should be excluded once they click).

More often than not, the explanation for this is organic.

Here’s a funny, funny thing: If an ad gets a ton of engagement, it will actually get plenty of organic distribution. Even if it only exists as an ad, the minute it gets comments, likes or shares it can be distributed organically to friends.

How about an example from this experiment I’m running. Here’s a video that only appears as an ad, targeting those who clicked the “Advanced” link in my first ad… 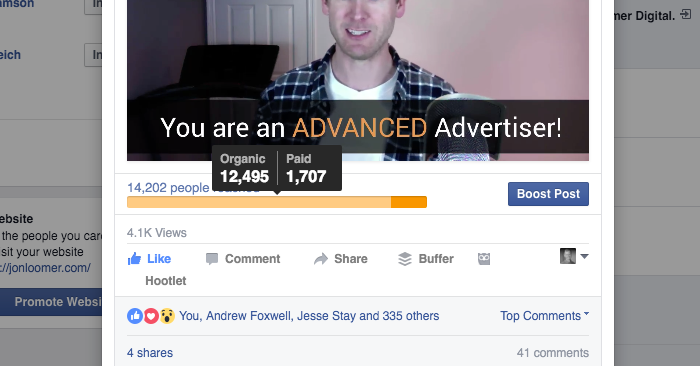 That’s crazy, right? It’s a “problem” we never expect with ads. If you get minimal engagement, it’s not something you’ll ever notice. But when an ad that reached only 1,707 people as an ad receives 338 likes, 41 comments, four shares and more than 4,000 3-second video views, crazy things can happen.

The result: The vast majority of people seeing this “ad” are actually seeing it organically. They aren’t the intended audience, and there’s nothing I can do about it.

My first ad includes a carousel of images to click to indicate whether you are a Beginner, Intermediate or Advanced Facebook advertiser. When you click one of those links, you’ll be taken to a landing page that thanks you for clicking and tells you what to expect.

If you see this page, it’s entirely possible that you don’t read it and you immediately close it out. The Facebook pixel generally needs some time to load in order to fire and add you to a Website Custom Audience. If you closed the page prior to the pixel firing, you never would have been added to an audience.

As a result, you would not be included in future targeting or exclusions as was expected.

3. Facebook is Unable to Add You to an Audience

I have received complaints from some who see an actual sponsored ad when they should not. During my experiment, there is one common theme when this happens most: It is the invitation that is targeting my Facebook fans.

When targeting my fans, it has not been proven that all of those in the audience can be added to a Website Custom Audience. It’s possible that they have browser or device settings preventing Facebook from doing that.

In conclusion, stuff happens. Understand that I may have all of my targeting right. Facebook may be doing everything right. But due to several factors that neither I nor Facebook can control, you may end up seeing something you think you shouldn’t.

What’s funny is that this is normally not a “problem” at all. You aren’t upset if your ad gets so much engagement that people outside of your target audience see it. People aren’t scrutinizing whether they should or shouldn’t see it.

But in the case of my experiment, it’s the perfect storm. The ads get insane engagement, organic reach is ridiculously high and the audience scrutinizes what they are seeing and why.

On one hand, you could say that my experiment is evidence of how flawed ad targeting can be. But this is certainly not an example of what is typical.

It’s instead something I have to live with — a “good” problem, I guess!