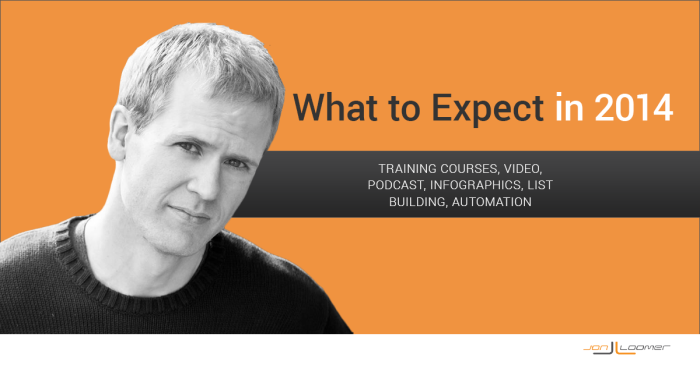 I’m admittedly not a big planner or forecaster. I find predictions to be mostly a waste of time since we don’t know what is going to happen — it’s just a guess. And while I may have some initial plans, I end up being more of a “from the seat of his pants” kind of guy (which I know isn’t ideal).

That said, I also realize how important it is to have a vision, and I do consistently sketch out what I hope my business will look like at the beginning of each year.

This website changed substantially over the course of a year in 2013, though that change was gradual (at least to me). I expect more big changes as we head into 2014.

Any changes, of course, need to have purpose. So following are first my priorities and then my plans for executing those priorities in 2014…

Training Courses: This is a huge shift for me from year to year. Heading into 2013, training courses were nothing more than a concept. I focused the vast majority of my time on writing blog posts.

But now I know that the present and immediate future of my business lie in training courses. Therefore, I’m going to focus on improving current courses and creating new ones.

If you previously purchased the Power Editor course, that is being moved over to Infusionsoft. All future courses will be built with Infusionsoft going forward.

The Insights course is unfortunately a bit behind schedule since I was hoping to first relaunch the Power Editor course. I now hope to have it completed by the end of January (in the meantime, you can get it for half off!).

I hope to launch up to four courses this year. That could be a matter of relaunching current courses (those who have already purchased won’t need to pay again), creating new courses from scratch and partnering on courses. Lots of ideas floating around here.

Other considerations include a private community (with a low monthly fee) and a certification program.

Videos: During the first half of 2013, I experimented quite a bit with video. It was one of my goals for the year, and I attacked it.

I set up a basic studio in my basement and went through three cameras. But once I started working on my training course, weekly video took a back seat.

A big reason for this is that it simply wasn’t efficient for me. I’d spend 30 or so minutes recording, and then the editing and publishing process would take several hours. It isn’t my expertise and I don’t have the time for it.

So I plan on simplifying this process by hiring someone who is an expert at video editing. I’ll spend the 30 or so minutes to record and then send the files to that person to edit.

What does this mean? It means the weekly video blog will be back (though no ETA here). It also means that I plan to redo all of the training course videos to make them more professional.

Podcast: It’s put up or shut up time for my podcast (The Social Media Pubcast). While it does well (the typical episode gets 6-12,000 downloads) it’s not clear to me where it fits.

I have hired someone to edit these now, so it’s no longer a burden for me. I record and send the files in to Dan Jost, who edits. Very easy.

But the main issues have centered around monetization and measurement. A download doesn’t tell me much since I have a widget on the side of each blog post. So people could be listening, but only for a few seconds or minutes (I don’t know). And it’s not clear if it is leading to much revenue.

I’ve stopped writing a weekly recap of my podcasts since I don’t find those posts to be particularly popular. To keep with the them here, I need to be more efficient.

So I do plan to continue the podcast, but I need to see some growth this year. One goal is to have my podcast featured in iTunes. When that happens, it’s a sign that I’m on the right track.

Imagery: There was a time when I created all of my own images. What a mess that was!

This year, I want to pass that off as much as possible to someone who actually knows what they’re doing. In this case, it’s Lea Heckley (who also happens to be a designer for ShortStack).

I now have Lea working on regular design projects that include ads, Facebook apps, cover photos and now infographics.

In 2013, that number dropped to 230. However, much of that happened through July — before my training courses — when I was averaging over 20 posts per month. I now keep it closer to 15.

This number needs to drop because my priorities have changed. Writing a lot is good for traffic, but I need to drive people to the things that make money. And since traffic hasn’t dropped (it’s continued to rise), the need to write as often as I once did no longer exists.

I do love to write. But I need to cut back. And this also means diversifying more across types of media (video, podcast and infographics).

Email List Building: This is the most important item of all!

I’m not reacting the way most are regarding the reported drop in Organic Reach on Facebook (read this, this, this or this). The main reason for this is that I’ve always diversified, and I realize the importance of advertising. But it’s a good reminder never to put all of your eggs in one basket.

It may surprise you that only 11.5% of my website traffic came from Facebook during November and December of 2013. On the flip side, 63.3% came organically from Google.

Interestingly enough, however, the revenue that has come from Facebook and Google are nearly identical. So Facebook is certainly more efficient for me.

But that Google percentage worries me. I appreciate all of that traffic, but it could disappear overnight. As a result, building an email list is incredibly important.

CampaignThe campaign is the foundation of your Facebook ad. This is where you'll set an advertising objective, which defines what you want your ad to achieve. Automation: A big part of increasing my email list will be through campaign automation. I need to do a better job of funneling people appropriately.

I’ll continue to build my list with the help of a widget at the top of each post and the Pippity plugin. The mini-webinar is also a list builder.

But I will need to focus on new methods to build my list in the coming year with the help of unique content.

Okay, so how will all of this look when executed? Hopefully, something like this…

Monday: Blog Post
This one should be set in stone. Every single Monday, expect to see a blog post from me.

Tuesday: Blog Post (If Necessary)
I wrote many Tuesday posts in 2013, but that will be scaled back to an “as needed basis” in 2014. If there is something to write about, I’m writing. Otherwise, this day will be set aside for video and podcast recording.

Wednesday: Weekly Mini-Webinar
The weekly mini-webinar has been a great list builder, so I’ll continue this into 2014. Since it’s informal and short, I don’t find it takes much of my time, all while providing high value.

Thursday: Video Blog
Once a week, I’ll answer your questions in the form of a video blog published to YouTube. I’m not yet sure if this will include a blog post, but I’m leaning towards YouTube publication only.

Friday: Podcast
Every week, I’ll sit down with a guest (or go solo) and discuss the world of Facebook marketing over a beer on The Social Media Pubcast. Very casual and relaxed, resulting in a 30-40 minute show.

Breaking News: As Needed
I can’t avoid it. If big news is announced, I’ll need to write about it instead of waiting until Monday or Tuesday to write.

In the end, I hope this means I am down to the following:

While I expect to be far down from the 320 blog posts I wrote in 2012, this is still 220 pieces of content! And it doesn’t include the work going into the training courses.

What Are Your Plans?

What are your plans for the coming year? Let me know in the comments below!