Yesterday, I did what I do best: Respond to the release of a new Facebook feature before I got a chance to use it.

Today, I am happy to say that I have the new Facebook Subscribe feature and I am pleasantly surprised. While I thought it had potential, I had some concerns about how some users would make a privacy issue of this (falsely) and I questioned the utility of subscribing.

Facebook users are great about freaking out about privacy when they do nothing to protect that privacy. We’re a lazy bunch, but Facebook has certainly brought some of this on themselves. They have been aggressive in getting users to do things by default that they may not want to do.

Subscribing wouldn’t change what you share publicly — you already choose or choose not to do that — but it would now make it easier for people to follow your public shenanigans. And that would surely bring unwanted attention away from what could be a useful tool.

At least this was my concern. Now I get to see it in action, and the feature has potential. Let’s take a look…

When I go to my profile now I see a link for “Subscriptions” under Wall, Info, Photos, Notes and Friends on the left hand side. That’s new. Let’s click on it… 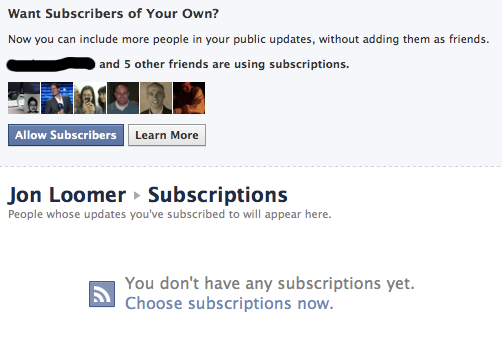 What I see when I click on Subscriptions for the first time.

1) Letting me know that my friends are using the feature (always smart)
2) Click a button to allow subscribers (wait, that’s good!) or Learn More
3) Click a link to choose subscriptions

My ears perk up over number two since this is not standard operating procedure for Facebook. They are risk-takers, and this is a conservative move. But let’s click the button to allow subscribers and find out what’s next…

Allowing subscriptions for the first time...

Facebook, I’m proud of you. So here’s the deal… You are already automatically subscribed to your friends (or what they will let you see). That makes sense. So people subscribe to you now in that sense. But otherwise, no one can subscribe to your public posts until you allow it.

This is really important. Had the default been set to “on” Facebook would have undoubtedly received a backlash over privacy. Granted, the feature itself doesn’t expose your privacy, just your insistence on writing public updates. But privacy would have distracted users from the potential utility in the feature.

Now, I don’t know how you can complain. I’m sure someone will. But you have to go to some trouble to turn it on. If you don’t want people you don’t know to subscribe to your public posts, they won’t. It’s pretty simple. Even the lazy benefit.

Also note that even when you allow subscriptions, the default for allowing comments from anyone is off and notifications is for friends of friends. The first will slow the “who are you and why are you commenting on my post?” complaints. The second, well…

Depending on how this is applied, this could be sneaky smart. The options for receiving notifications are Anyone, Friends of Friends and No One. Does “Anyone” include friends? Or does it just include Friends of Friends and everyone not a friend? That’s not clear. But since Friends isn’t an option, I’m assuming they aren’t included in the bucket of “Anyone.”

That would be a good thing. If I received an alert when a close friend subscribed to me, that would tell me that they are limiting the content of mine that they read in their feed. It wouldn’t hurt my feelings, but it might hurt some. If I’m understanding this correctly, you won’t receive notifications when friends use the feature (or at least by default). That’s probably a good thing. It’s completely unnecessary. Keep a close eye on this.

Facebook also makes suggestions of people you should subscribe to, along with which of your friends subscribed as well. 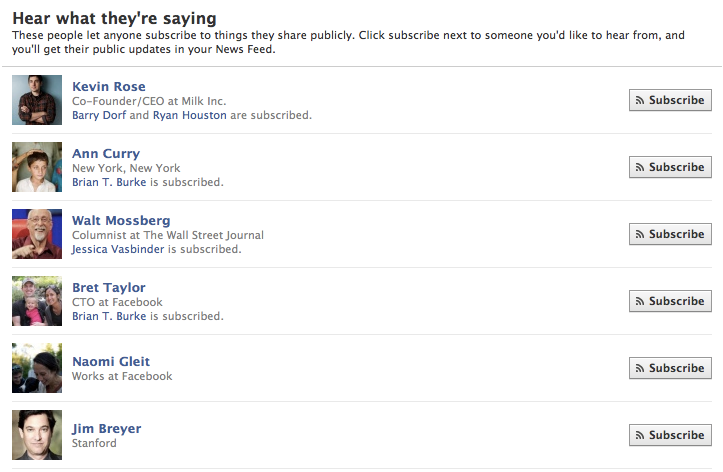 Very Twitter like. And smart. My fear was that subscriptions and being a friend were going to be confused in a haze and that I would search for people and have to choose a button based on my preference. Instead, Facebook — at least for now — is keeping these things completely separate. Since not everyone allows subscriptions (and most won’t), Facebook can recommend those who do. They can also choose to feature those who are most popular or those my friends are following.

It’s smart, people. And it has potential.

Okay, so we’ve calmed our fears. We’ve seen that the feature may be useful for controlling the information we view from our friends, allowing people to subscribe to us (we’re famous!) and for following the thoughts of celebrities. But, wait a minute…

What about celebrity Facebook pages? Isn’t that why they have those? Are they going away? Or should the page now have a more commercial feel while the subscription is more personal? It will be interesting to see how this plays out.

I was originally skeptical. I thought it was a decent idea before I saw it in action, but I feared that the privacy issue would distract from its utility. And I thought it would be confusing adding a layer of complexity to being a friend or a subscriber.

But… This can work. It may not. There is a pile of other features Facebook and other companies roll out that are good ideas, but they never catch on. The way they are integrating it, being careful with privacy concerns and making it so it’s basically a Twitter celebrity relationship has me thinking that this could have legs.