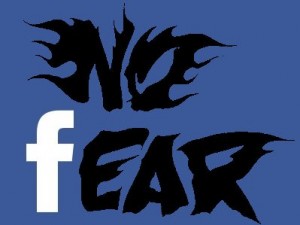 This is a subject that’s been on my mind lately. I keep asking myself…

What are the reasons that social media campaignsThe campaign is the foundation of your Facebook ad. This is where you'll set an advertising objective, which defines what you want your ad to achieve. More fail?

…and I keep coming back to one thing.

Sure, lack of knowledge contributes. Lack of planning. Lack of resources. Lack of time. If you were to create a list, these items would be near the top.

But I dug deeper. Why do people run social media campaigns that are bound to fail from the start? Why do these campaigns have no apparent goal or structure? Why do campaigns stop before they have a chance to succeed? What is the source?

People are afraid to fail.

That’s right. Social media campaigns fail because those running them are afraid to fail. It’s a vicious cycle. But let me explain…

Those who are most successful — not only in social media, but with anything in life — know what they want. They decide ahead of time what the end goal will be. Then they decide how to get there.

I am going to get 1,000 new Facebook likes by the end of January.

Maybe this number is crazy. But set a goal that could be a bit nuts. Then determine how you’re going to get there. Tell others on your team about your goal. Make it public.

Every day, remind yourself of your goal. Update your team with where you stand. Because you set the number and the date, you will continually motivate yourself to reach it. Ten days away? Where am I? How many likes do I need to average per day to get there? What resources can help me get to that goal?

If you don’t set a goal — a measurable number by a specific day — any result is acceptable. When you set goals, you know that 10 likes today puts you at a certain position towards your goal. Without goals, there is no context. It’s just experimentation.

But setting goals for a difficult project is an obstacle for most of us. We believe that if we don’t reach that goal, we fail. So we don’t want to set that goal and we don’t want anyone else to know what it is. That way, we never truly “fail.”

In the process, you create a campaign without a soul. Without a chance.

This is the thing… Those who create the best social media campaigns have no fear. You can see it in the product. They are aggressive. Unique. Confident. Bold.

When they set goals, they do not fail. Does that mean they always reach those goals in the time planned? Nope. But think about this: If you set a goal for 1,000 new likes during the month of January and you get 900, is that a failure?

Meanwhile, the goal-less campaign is sputtering along. No direction or motivation. Bound to fail because they’re afraid to take risks and go public with their goals. They are afraid that if they set a goal and don’t reach it, they’ll be perceived as a failure.

Those who succeed understand there is nothing to fear. Let’s say they don’t get a single new like in that month towards their goal of 1,000. But they were constantly reminded of that goal, and constantly worked towards it every day. They investigated, educated themselves and tried new things, knowing the window was closing. That campaign was a priority.

They didn’t fail. They learned.

Don’t be paralyzed by the fear of failure. Whether it’s your Facebook page, Twitter account, your business or your life in general, set goals. Pick a measurable number and a specific day. Tell others about your goal. Take risks. Monitor your results. Track what works and what doesn’t. And every day, learn something new that will take you a step closer.

And you’ll have no fear.