Ever since Facebook’s big announcements two days ago, opinions have been flying. Not surprisingly, most opinions are to one extreme or the other: It’s the greatest thing to happen to humanity since the invention of water or Run for your lives, we’re all going to die!

Maybe I should be more excitable. I can try.

Today I want to focus on the items that annoy the heck outta me about the “New Facebook.” Granted, I don’t expect a perfect product at launch. I’m hoping that these items get corrected and improved.

I even sent out a public message on Facebook looking for some input. This is a combination of my thoughts and our little public brainstorm.

1) The value of smart lists and how they impact Top Stories, if at all, is not clear
I’ve used Facebook Lists as long as I can remember. Back when we were kids and they weren’t called Smart Lists, I’d spend hours creating and fine tuning them to make sure that I shared the appropriate information with the appropriate groups.

The thing was, only 5% of Facebook users joined me in using the feature. As a result, Facebook decided to create Smart Lists in an effort to encourage people to use them. They created an empty Close Friends, Acquaintances and Restricted list and pre-filled lists for Family, schools and companies you’ve worked for. The pre-filling was rather easy since users have already indicated who is in their family, where they went to school and where they worked.

I then merged a list I had previously created with Close Friends, thinking there was value in that. I figured that now Facebook knew who my Close Friends were and would cater information to me accordingly. They may do that, I just don’t know.

When you log into Facebook each day, you’ll now be presented with a selection of Top Stories — items that you may find interesting — that happened since the last time you were logged in. Facebook tends to use very broad language when explaining how they determine your Top Stories.

It would make sense that it’s a combination of things: comments, likes, level of interaction between you and that friend/page, whether you’ve marked something similar or by that author as a Top Story in the past, and probably whether or not they are in one of the Smart Lists (Family and Close Friends may give priority where Acquaintances may not appear in that Top Story area).

Now, I don’t expect Facebook to give away their special sauce here. But it would be nice if they were clearer about how these Top Stories are defined so that we can say, “Oooooooh, that’s why.” Instead, the typical reaction is, How dare Facebook tell me what they think I will find interesting? It’s poor communication.

I’m using these Lists to share information appropriately, but I was doing that already. Was it even necessary for me to merge lists? Is there value in using a Smart List as opposed to a custom list? That is not clear.

2) What’s the difference between All Updates, Most Updates and Only Important for subscribing?
This would be nice to know, right? If I’m trying to take control of my News Feed, it’s cool that Facebook allows me to limit the types of posts and amount of posts I see from certain people. The problem is, what does this mean?

All updates: Everything your friend posts
Most updates: The amount you’d normally see
Important updates only: Just highlights, like a new job or move

Goodness, Facebook, could you be any more vague? Can you throw me a bone here? Without understanding the benefits of each one, it’s really hard to make the determination based on generalities.

3) Difficulty creating lists and setting friend subscriptions.
Yes, it is incredibly easy for me to put you into a list or change your subscription level. Just hover over your name, click.

The problem, though, is that most of us have hundreds of Facebook friends. This is the reason why people haven’t created lists until now. It’s too much of a pain.

Why can’t Facebook create global options for our lists? For example, why can’t I say that I want to see All Updates from everyone in my Close Friends list? Maybe I want to see Most Updates from my Family? There should be no reason why you shouldn’t be able to do the same for everyone within your custom lists. Or even set a global setting for all friends.

[UPDATE: This may be a new development, but my wife tells me that when she set up her lists everyone in Close Friends was set to “All Updates,” Acquaintances were set to “Only Important” and everyone else to “Most Updates.” Either I’m going crazy or it worked differently for me because I merged lists… But always believe your wife.]

And that’s just one of the seemingly easy solutions that could be implemented to make list management so much more useful. How about check boxes? Give me a grid of my friends. Give me a single row all the way down. Check those that apply. Have a menu up top for Apply Change. Select “Put in Close Friends List.” BOOM!

I’m not a developer, so there may be issues with my simplified solution (actually, I’m sure there are). But come on, Facebook! There is an easier solution. If you want people using lists and subscription levels, do something about this.

4) Close Friends list is viewable by others?
I’m still testing this one out because the results so far have not been consistent. However, my wife has found that when I share certain types of content and when a friend of hers shares certain types of content using the Close Friends list, she can view everyone within the list. Granted, the title of the list isn’t displayed (we just told her). 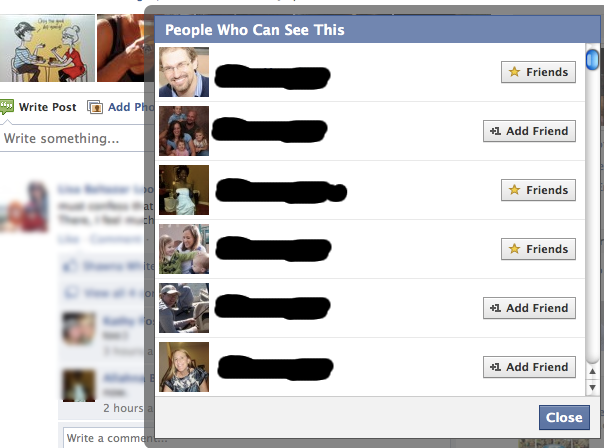 What value can this possibly provide?

We have not been able to get this to work with custom lists or even when items are shared generally to Friends. This would seem to be a bug. Why would Facebook want to display this? If the only time Facebook allows you to view the people who can see a post is when it’s shared with Close Friends, doesn’t that open up the likelihood of some upset people over being left off? What is the benefit of this?

More to come. Certainly an incomplete report. But let me know if you’re seeing the same, something different, or nothing at all.

5) Ability to customize audience for Spotify very hard to see
I was initially much more concerned about this. When I added Spotify, I knew to look for the option to customize my audience. I stared at my screen for a solid five to 10 seconds without seeing it. Maybe I’m just going blind. Eventually, I saw it. 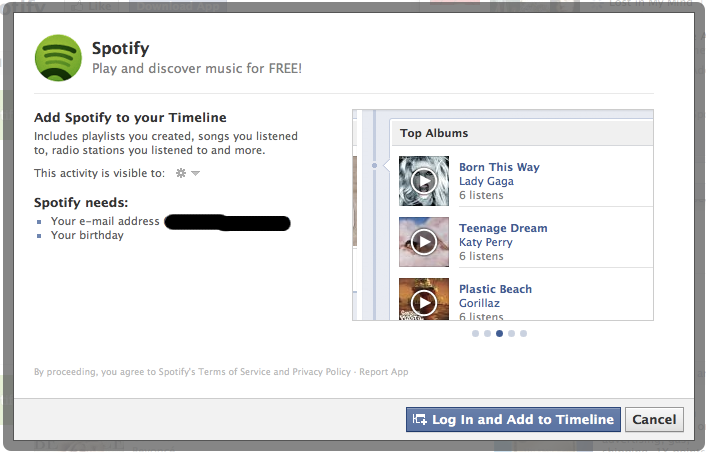 Good luck spotting the small line to customize your audience.

I changed it so fast, I didn’t even realize what the default was. It turns out the default is whatever you set your sharing default (set here). So if it’s public, this is public (this is a good time to make sure yours is not if you want any ounce of privacy). But mine was not. Mine was a small group. And others I have spoken to about it didn’t notice the option either, but also were fine with the group it’s sharing with.

But still… Look, Facebook. If you want to make certain that people have control like you say you do, don’t open yourself up like this. Granted, you use the default which is good. If you defaulted to Public, that would be very bad. But how hard would it be to make this bigger? You see this once (unless you go back into your Account Settings), why not just make certain?

6) Top Stories and Recent News are confusing
The time of day I like my News Feed most is when I’ve had my browser open for a long time and Top Stories are gone. It’s admittedly confusing otherwise. You have Top Stories, Recent Stories, and stories broken down by how long ago they were posted. There’s also a link at the top to “See X New Stories” and another below it to “X More Recent Stories.”

Come on, Facebook. Are both of these really necessary?

I don’t expect a perfect product from Facebook, particularly when they’ve changed so much at once. But the usefulness of some of these tools could be vastly improved with some of these minor tweaks. It could also make for much happier Facebook users who feel like their concerns are being heard, which has consistently been an issue.

What do you think? Any other items I’m missing here?