More than two months ago, I wrote a post called Facebook Scare: Uncheck Comments and Likes that was in response to a copy and paste status update spreading across Facebook.

Two months later, that post was my most popular piece of content yesterday. Traffic to it is again spiking because people are again copying and pasting that same old message to their status.

As you’ll recall, it goes a little something like this:

Do me a favor: please hover over my name here, wait for the box to load and then hover over the “Subscribe” link. Then uncheck the “Comments and likes” choice. I would rather my comments on friends’ posts not be made public. Thanks** Then repost if you don’t want your EVERY MOVE posted on the right for everyone to see, I’ll do the same for you if you want. just click like. Thanks 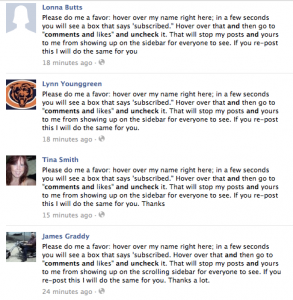 I ran a quick search of public Facebook posts, and what do you know? This one is again on fire. At nearly midnight MT, a search pulled up 17 nearly identical public posts during the past hour.

Let’s revisit what it is that people are afraid of, what they’re trying to do, why it’s failing, and the ridiculous irony of it all.

Some people still hate the Ticker. They see updates in the Ticker that they feel like they shouldn’t ever see. Your friend comments on a non-friend’s status update. You see photos of kids of people you don’t know. Suddenly, you think… Is my very private stuff being shown to people I don’t know??

The thing is, this takes thought and I’m not convinced most people are thinking when they post this. Instead, they simply read the copy and paste from a friend and react. They don’t realize that, all along, that friend simply reacted without thinking. Those words aren’t their own. They have been copied and pasted and copied and pasted over and over for over two months.

First, let me be clear that these are well intentioned people. This isn’t a hoax. With a Facebook hoax, someone creates a post that encourages you to copy and paste in an effort to deceive you and make you look foolish.

But in this case, someone sees a perceived problem and thinks they have a solution. As a result, they want to share that solution with all of their friends.

To solve the “problem,” the person who initially created this status update more than two months ago thought that you could simply get all of your friends to unsubscribe from your comments and likes. Simple enough.

Why This is Ridiculous

Let’s say you are the average Facebook user. Let’s say you have 120 friends. You copy and paste this status. How many of your 120 friends see the status update? How many do what you say and unsubscribe from your comments and likes? Five? Maybe 10?

But even more ridiculous… who are the people who will obey your command? They will be your closest friends. The ones who actually care about your comments and likes. The people you wouldn’t mind seeing this information. The people you are actually worried about, if they are your friends, will ignore you. But people who aren’t your friends will still see your stuff if you comment on public or friends of friends posts.

Remember that Facebook search I ran? I came up with 17 people late at night who had done this copy and paste. That’s 17 people, so panicked about their privacy that they copied and pasted this message, asking their closest friends to unsubscribe from their content. Oh, and they also did so publicly.

Think this was an isolated case of a public post? You’re wrong. In every case I saw, these people regularly post publicly. These same people who are so concerned that others know what they’re doing, yet they post publicly for anyone to see.

Do you not want friends to see your embarrassing comments? Don’t write them. Don’t want them to know you “like” Justin Bieber? Don’t like him.

Ultimately, this comes back to being smart. When you post something online, it is not “private.” If you send someone an email, they can forward it. If you comment on a friend’s public status update, anyone can see it.

What you control most on Facebook is your own content. Not your comments on the posts of others, but your own posts. Want to be private? Make sure only your friends see your status updates, photos or links. Use lists and make sure that even a smaller group sees that especially sensitive information. And don’t share anything that you’ll regret sharing if it somehow gets beyond that group.

And the best solution of all: Second guess anything that has been copied and pasted as a status update. Remember that your friend didn’t write it. Remember that if you post it without thinking it through, you’re not helping solve a problem.