I’ve had several people come to me with a problem they’re having with Facebook Timeline Milestones. Repeatedly, I’m hearing that, though Timeline will allow you to go back to the year 1000, users are unable to enter Facebook Milestones prior to 2011 (or 2010, 2009, or some other year).

At first, this seemed random. I chalked it up to another Facebook bug, which would be completely understandable during the initial launch of Facebook Timeline for Pages. But I think I know how to fix this problem for most people.

The first time you turned your page to Timeline preview and started messing with Facebook Milestones, you were presented with this prompt: 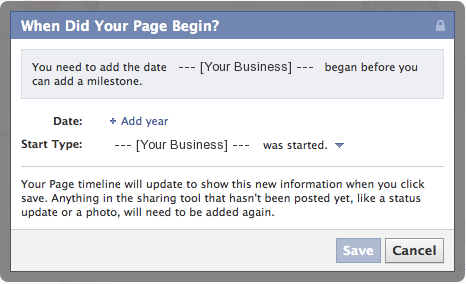 I’m not really sure why Facebook would be asking me “When Did Your Page Begin?” when I had already provided a Founded date in the Basic Info. But if you’re like me, you just wanted to dig into Timeline and skip past this as quickly as you could. So maybe you entered 2012 just to get moving.

Well, that presents a problem. Facebook now thinks that your company started in 2012. As a result, this will happen when you attempt to enter a Milestone:

To fix this, you’ll just need to edit your Founded date. On the right hand side of your Timeline, click on Founded (or Started or whatever word you used for when your company began).

You may need to scroll to the very bottom of your Timeline to get to this entry. When you get there, click the Edit icon.

Now simply change the date to what it should be. You can include month and day if you want, but it’s not necessary. Let’s set it to 1982.

Now we’re home free. Create a new Milestone, and you’ll see that years dating back to 1982 will be available. 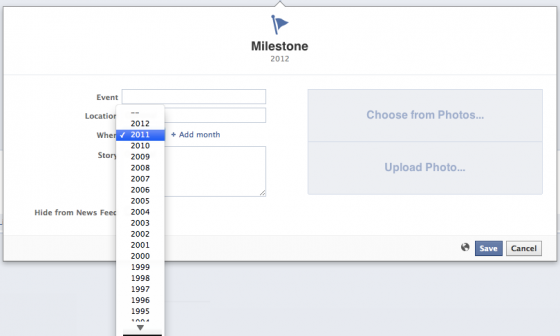 There does remain an issue, however. Let’s say that your organization started in 1982, but there was a critical Milestone that led to the creation of your company in 1981. You can’t currently enter that.

Technically, you’d then just change your company’s Start Date to 1981 as a work-around. But Facebook should consider allowing you to go outside of your company’s start date when entering Milestones and none of this would be an issue.

And really, there’s a fundamental issue here. The prompt that caused this problem asks when your Facebook Page began, not your company. So why should that dictate the date range of your Milestones? Hopefully Facebook will address this.

Does this solve your problem with entering Facebook Milestones? If not, please let me know in the comments below!