This is my baby… My labor of love. The project that keeps me busy through all of what would otherwise be free time. Because free time is overrated.

On June 21 of 2010, I remember sitting at my computer, reading through my Twitter feed. My favorite team, the Milwaukee Brewers, were going through a rough patch, and it was at a point that made it clear that — even though the season wasn’t even to the halfway point — this season was going to end like all of the rest. In disappointment.

Reading through the tweets from Yankees and Phillies fans made me sick. I hated them for their enthusiasm and optimism. Because that’s what we baseball fans are best at: jealousy and hatred.

I thought about how great it would be to see positive things about my team roll through the feed. Then I thought… How cool would it have been in 1982 to follow the Brewers’ Twitter feed? You know, if there had actually been a Twitter?

Then it occurred to me… I can recreate it. The stats are out there. Box scores, game logs, lineups, standings. I can figure out the leaders through particular days.

@TweetsFrom1982 helps Brewers fans relive the 1982 season in real time as a fan would have lived it then.

It was simple. But it was the type of tweet you’re used to seeing prior to games now. So it was perfect.

I tweeted more. People started following. I began adding play-by-play of games, channeling the voice of Bob Uecker. People ate it up. I started reacting to bad play, asking for players to be traded, overreacting to the good and bad the way fans do now. Suddenly, I realized I had created a monster.

It was a monster, but it was an original one. Others have created Twitter accounts about history, spitting out facts about what happened on a certain day. But nothing like this. Nothing this authentic, from the eyes of a fan without knowing the future. Nothing this committed. Nothing this crazy.

@TweetsFrom1982 quickly gained traction and began getting regular recognition from Brewers fans and media. I was having an absolute blast. In September, an old friend and former NBA colleague of mine, Rob Peterson, joined the team. With the help of Charlie Zegers, PastKast.com was born in the final week of the regular season.

The purpose of the website was to do the things that we couldn’t do on Twitter. Instead of writing quick 140 character bits, we’d write entire game recaps, series previews, reactions and analysis. And of course, it was always done with authenticity as the priority, reacting as we think fans would have in 1982 to the ups and downs of those few weeks.

When October closed down, our work wasn’t finished. We knew there was more to be done. This was not going to be just a hobby. It had the potential to become big business.

In the early months of 2011, we held a poll to ask our readers what team they’d like us to follow next. We’d continue to cover the 1982 Brewers — and this time we’d start from the beginning — but we wanted to add another team to the mix. The people spoke and chose the 1987 Brewers. 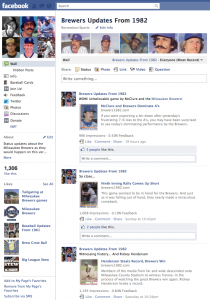 Facebook adds another dimension to the PastKast network. Brewers Updates From 1982 has more than 1,300 fans.

Things were going perfectly. But we were constantly aiming to make it better.

One thing that bothered me was that far too often I didn’t have all of the facts. I’d often make educated guesses about details of the season, and that made me uncomfortable. Then we discovered that Google indexed many of the Milwaukee Journals and Milwaukee Sentinels from both 1982 and 1987.

Suddenly our tweets, articles and updates had substance. We had quotes from players and coaches. We had trade rumors, minor league transactions, details about the weather, information about stadium promotions, costs of concessions, you name it. We had everything we needed to make this beautiful.

And that’s where we are today. This project is more than a year old and getting stronger by the day. We have more than 1,000 Facebook fans of Brewers Updates from 1982 and nearly 1,000 followers of @TweetsFrom1982. We’ve been featured by Yahoo!, Athlon Sports, OnMilwaukee.com and others.

We’ve also added Jon Davies to do the heavy lifting with research. I’m excited as we head into the final full month of the regular season of those two years. 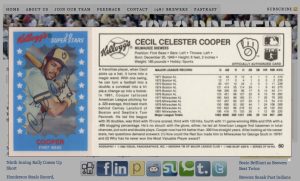 View a close-up of the front and back of any 1982 Brewers baseball card on Brewers1982.com. It's like your'e a kid again, holding the cards!

But we’re far from done. This is just the prototype. What you see now is an example of what can be done with any team, any year, any sport. We’ve been successful with the smallest media market in baseball. Think of what we can do with the Yankees. Or Red Sox. Or Dodgers. Or Cowboys. Or Lakers.

We have big ideas. I see this becoming a Wikipedia-like resource of sports history, filled with fan nostalgia and memories. Instead of being a place for us to cover the past, it will be open to the public, crowdsourcing our content. We’ll branch off into mobile, allowing you to follow historic games of your favorite teams in real time. Think video, podcasts, classic photos, memorabilia sales.

And it will be glorious.

The problem, of course, is that we don’t have the money or resources to take that next step. Until then, it’s just a great idea covering a couple of fun seasons of the Milwaukee Brewers. It has the potential to be so much more than that. And you can be a part of it.

We need more people. If you want to join the PastKast team, let us know. We need writers and researchers. If you have skills in web or mobile development and want to contribute your time to make this thing great, we’d love to have you.

In the end, we need more than people. We need financial support. If we get that, the possibilities are endless.

Want to become part of the PastKast team? Let’s talk!