Working for the National Basketball Association, beginning the end of 2005, was an absolute dream. Up until this point in my life, I was working hard in an unfulfilling insurance profession. Knowing that I wanted to pursue a career in sports, I began writing and networking at the end of 1999. 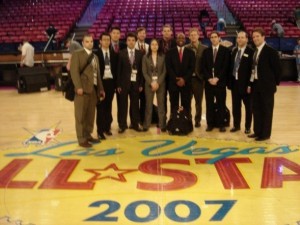 This out-of-focus photo from the 2007 All-Star Game in Las Vegas may be the only photographic proof in existence of my employment with the NBA.

The experience and connections I made during that time led me to this amazing opportunity. Of course, it was a risk personally. Our then three-year-old son was only a year past surgery to remove a cancerous tumor from his chest. And to take the job we’d need to move from Colorado, where we had built a comfortable life, to New Jersey. After careful deliberation, we decided to make the move.

Before I was hired, the NBA did not have a fantasy basketball department, section or strategy. The Manager of Fantasy Games position was brand new, and I was lucky enough to help define the role.

I was ultimately responsible for everything fantasy games related: product, content, partnerships, advertising, community, website traffic, strategy, seasonal magazine, promotions and anything else that fell under the “Fantasy Games” umbrella. It also led to some nice perks like attending drafts, draft lotteries and covering the 2007 NBA All-Star Game in Las Vegas as a writer.

I could write a book on my experiences, accomplishments and responsibilities. But let’s focus on Product, Content and Community. 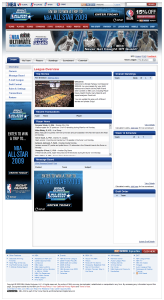 I was responsible for creating a menu of games for all seasons: NBA regular season (first and second half), NBA All-Star Game, NBA Playoffs, NBA Draft and the WNBA season. In a typical season, we would run 10 unique games.
During my three seasons with the NBA, the games we featured were a combination of those we built internally or found a partner to build for us. In all cases, I would project manage the development of the game while also planning the launch, marketing and promotion.

The most fulfilling projects were those where I would come up with a game idea, brainstorm it, develop and launch it. This was the case for Drive to the Finals, Pick One Challenge (NBA and WNBA) and the biggest project of them all, Ultimate Fantasy Commissioner. The coordination, intricate planning and balancing of resources made it a challenge, but incredibly rewarding.

My goal was to not only launch the best possible games, but create a menu of content that properly complemented the game playing experience.

Fantasy game players would need to have access to injury reports and depth charts, so we commissioned Rotowire.com to provide that information and we manipulated it for our website.

Each season, I created a content plan that would properly support those playing each of our games. In coordination with Rotowire, we provided two articles per day with strategy advice relevant to our game offerings. Most of these articles were written by Rotowire, but I was the “head writer and editor” as well, penning several articles a week. 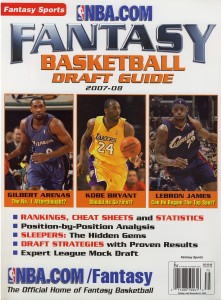 Possibly my favorite content piece was the NBA Cares Celebrity Fantasy League. Each year, we had eight to 10 celebrities participate in a fantasy league, and the winner would get a designated amount of money donated to their charity of choice. Over the years I worked with such people as Samuel L. Jackson, Will Ferrell, Spike Lee and others. One of my favorite stories is about how I helped Sam Jackson draft his team over a conference call. It was an awesome experience that I will never forget.

Content did not stop when the season was over. In fact, there was no gap whatsoever. Once the draft took place in June, I led work on the NBA.com Fantasy Basketball Draft Guide, helping fantasy basketball players plan for their upcoming drafts. I not only planned and wrote much of the content, but I managed the relationship with the publisher, had final say on projections, organized the magazine, and inserted ads for our products and services into the publication.

It all seems a bit archaic now, but NBA.com didn’t have an online community when I arrived. As was the case at many high profile companies, there was fear of not being able to control the conversations. I was a major proponent for online community, as I viewed it as a necessary component for a fantasy games player.

Eventually, community was launched on NBA.com, and Fantasy Games was the pilot platform. We used it to discuss gaming strategy, communicate with users about product bugs and fixes, roll out new ideas and promotions and eventually for blogging. Once again, I not only managed this portion of Fantasy Games, but I was the face of fantasy within the community.

An example of how I used the power of the community was when we launched a promotion called Premier Fantasy Championship to find the finest fantasy players in the world. We ran a single 30-team league, mimicking the NBA setup itself, with participants from a dozen different countries. But to participate, you first needed to fill out an application that would tout your worthiness. More than 10,000 people applied.

The NBA was also a very early adopter of Facebook. Once the social network opened up to the full non-student public, the NBA was already in the door. We created a group (before pages) that I helped manage. And we also worked with Facebook to create a playoff bracket application on the platform. This was before third parties were allowed to develop their own applications.

This is one of those jobs, no matter what I do in the future, that I will brag about for years. It was fantastic. My days were full, I had brushes with celebrity, and my laundry list of responsibilities helped make my knowledge of managing a website extremely well-rounded. It is because of this job that I am prepared for anything that comes my way.