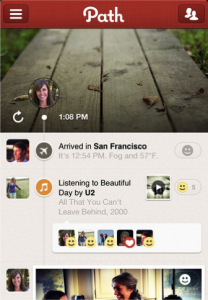 Even I remember when Facebook was cool because it was only for college students (I was in high school, so I really got that feeling of the coolness that I was so sadly denied). People liked Facebook because it wasn’t full of people like its competitor, MySpace. You had networks, so you only had to connect with people whom you wanted to connect with. Even if you weren’t connected as “friends,” you were connected through the network.

This made it easy to find people who you actually know or may know in the future as opposed to random people all over the Internet trying to be your friend. It was intimate, and people liked that from a social network.

This lasted for about two years, and then in 2006 the site was opened up to the world. As we now know, this did not scare people away from Facebook and the site went on to become one of the most successful websites in history.

Nevertheless, as the popularity of the site continues to rise, a new social networking site is bringing back the idea of intimate—Path.

Path is actually not a social networking site like Facebook, but simply an iPhone and Android app that has gotten some attention. In so many words, the app is a place where you can share what is going on in your life with your friends and family.

The app was created in November 2010 and was re-launched about one year later with the name Path 2. Path was originally just a place to share photos, but you are now encouraged to share other aspects of your life. According to Business Insider, the app grew from 10k users to 300k users in just 19 days.

The app was created by big names such as Napster founder Shawn Fanning and former Facebook employee Dave Morin, and is only expected to grow. There is still a place for a large social network like Facebook, but Path is surely making its way onto the scene.

So is it the small friend count that has people excited, and is this intimacy the path Facebook had envisioned? The emphasis on photos? The fact that it is a mobile app? Let us know your thoughts!