It wasn’t long ago that I had no expectations for Facebook search. I never used it. It had no value.

But now that it’s somewhat improved, I’m begging for more. And as a result, I’m more critical of the little things that drive me crazy.

It all started with a fun video that I took of my three-year-old son, JJ. We Loomer men are die hard Brewers fans, and that begins at a very young age. Below is the scene during Game 2 of the World Series as JJ refuses to acknowledge that the Brewers are not playing.

It’s pretty adorable stuff. And while I may be a bit biased, it spread quickly across Facebook, Twitter and YouTube. KSDK in St. Louis even picked it up and made it their Web Video of the Day.

So, logically, I wanted to know just how quickly it was traveling. Luckily, Facebook now gives some insight into this when you type a few key words into the search bar. The title of the KSDK post was “Web Video of the Day: Young Brewers fan still in denial.” So, I started typing “Young Brewers fan” into the Facebook search…

Pretty cool. Facebook tells me that 109 people have shared it. This seems to be dynamic since when I refresh and check a few minutes later, the total is higher. So, one would assume if I then continue to the search result, I’d get a break down of all of the people who have shared this (all that I can see according to privacy settings) on Facebook. Well…

That’s a whole lot of nothin’, my friends. No friend posts, no public posts, nothing.

You’re telling me that 109 people shared it, and not one of them did so publicly? I call B.S.

The easy way to prove this is wrong is that I know I shared it. My wife shared it. Two of my friends shared it… 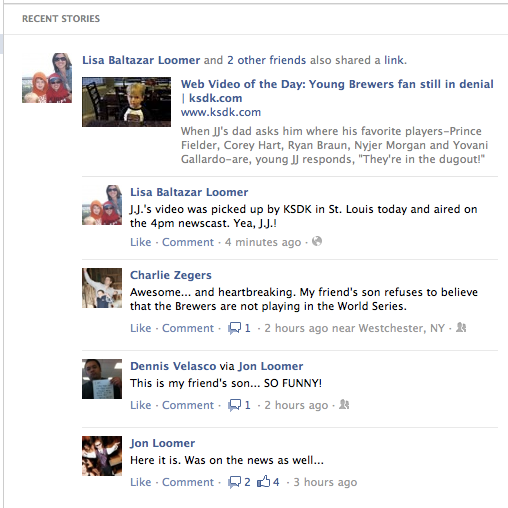 So at minimum, those results should have come up under “Posts by Friends.” But not there.

Then I decided to check out the Facebook page for KSDK NewsChannel 5 in St. Louis. Yep, there’s the video… 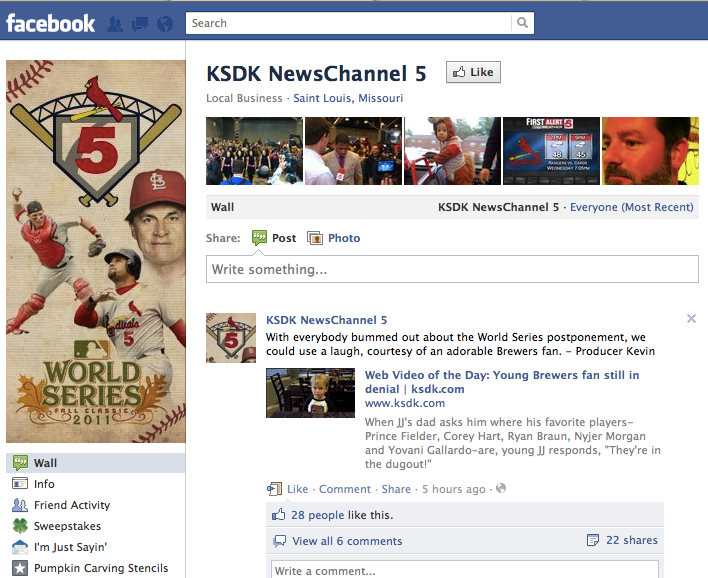 And since Facebook now tells us how many times an article has been shared, I see that the video’s been shared 22 times from this post alone. If we want to give Facebook the benefit of the doubt, the blank search results might mean that no one shared the link publicly. But, let’s click on the link for the 22 shares… 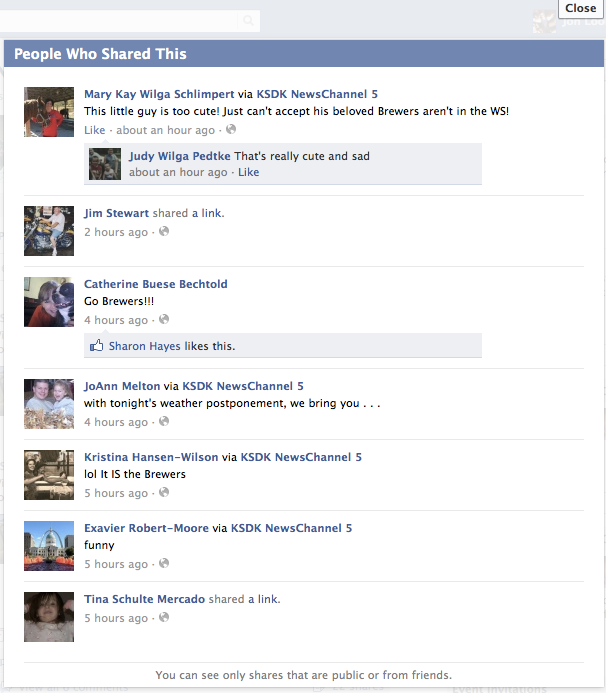 How about that? Seven people shared it publicly. So why, then, are these results not appearing in search?

It’s frustrating. Until recently, I had no use for Facebook search. But now that I know it can have value — quickly finding out how many times my links have been shared and also getting insight into what people are saying publicly about it — it’s agitating that it simply doesn’t work.

Facebook search could be glorious. Instead, it makes me angry.

Help us out, Facebook. This is one of the areas Google dominates you. Just make this work the way it should.