I noticed something a little different in my News Feed yesterday… 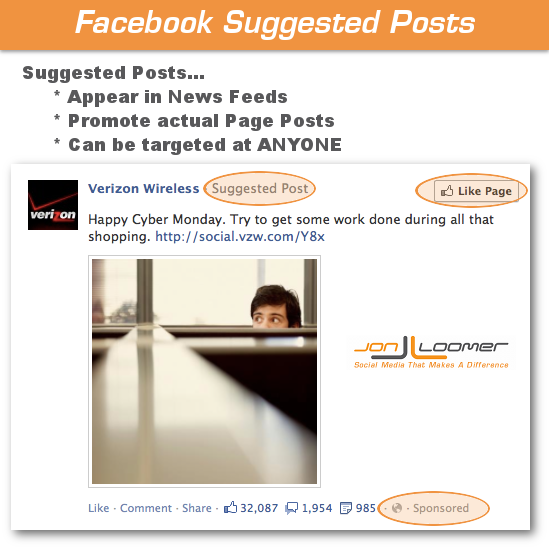 I had two immediate thoughts when I saw this:

People freaking on Facebook is nothing new. That’s how they roll. But this makes for the perfect freak-out combination: 1) Advertising, 2) No ConnectionsWithin your ad set, you can further narrow targeting by adding a connection to a page, app, or event that you control., and 3) News Feed.

First of all, yes. I just used two numbered lists in two different ways in the span of consecutive sections. Numbers are awesome.

Up until now, a brand could enter your News Feed in three ways (numbered list alert!):

In each case, there was a connection — either first or second degree. Even if you weren’t a Fan, there was some level of familiarity because you would be told that Friend X was a Fan.

Now? As you can see from the Suggested Post above, there is no given connection whatsoever.

This is essentially a melding of a sidebar Page Post Ad and a Promoted Post. In each case, you are promoting an actual post from your Page.

Of course, the extra kicker to this is the “Suggested Post” wording and the “Like Page” button. This could be a major addition to the Facebook marketing toolbox when it comes to Page growth.

But do not underestimate the potential backlash or the impact said backlash could make.

If people report your sidebar ads or hide them, no big deal. They just won’t see them anymore.

But with these ads, they can voice their displeasure right on your post. For all of your current Fans to see. Intermingling with Fan comments about how awesome you are, there’s the significant potential of “YOU SUCK!” comments.

Sure, this was possible with Promoted Posts before, and is apparently the source of backlash already (though this may actually be directed towards usage of Suggested Posts or a combination of the two ad types). But I wouldn’t expect users to hold back one bit when confronted with brands in their News Feeds that not even friends are connected to.

Here’s the big problem, outside of the damage control you may need to take care of on your posts: Spam complaints negatively impact EdgeRank.

In other words, Facebook takes cues about how interesting or spammy you are from its users. If you’re reported regularly, Facebook considers this in their algorithm. We can assume (how much, it’s not clear) that the more spam reports you get the fewer people you will reach.

So this is not something to take lightly. Feel free to experiment, but do so very carefully.

Here is my recommendation…

1) BudgetA budget is an amount you're willing to spend on your Facebook campaigns or ad sets on a daily or lifetime basis. Low

I’d always advise that you set a low budget when you experiment. This is a prime example for why you want to do that. The less you spend, the less damage if something goes horribly wrong.

Monitor your comments, monitor the results of the ads and monitor your negative feedback. They all should be taken into account when determining success or failure.

While you always want your ads to reach a relevant audience, it’s even more important with this type of ad. You need to avoid the complete swings and misses on targeting here. You need your content to be relevant. If not, people won’t just ignore you as they do a typical sidebar ad. They’re going to kick you around the block and back again.

This is your time to shine. Purchase a Suggested Post when your content is brief, visual and awesome. Do not promote something that looks like an ad. I’d also recommend only promoting AFTER receiving significant positive response from your Fans.

Now, I realize my entire post has essentially been written to scare the crap out of you. But the thing is that there could be significant payoff. But the users hold the cards.

Such an ad is not for amateurs. You need to plan this out properly and professionally. If you screw it up, screw up quietly.

What do you think? Is this something you will try?