I’ve already written two posts about this new subscriptions feature on Facebook. The first was when Facebook announced it. The second, yesterday, was when I first had access to it.

So now I’ve had a day to use it. Here are my thoughts…

I’ve allowed subscriptions so that famous people from around the world who have always wanted to follow my Facebook updates finally can. I’m positive that supermodels, world leaders and hall of fame athletes were simply waiting for this feature to be rolled out so that they could finally hear about my daily thoughts.

Well, you can subscribe to my stuff now. I was excited when the first person subscribed. Then the second. Now there are seven. But the thing is… Who are these people? 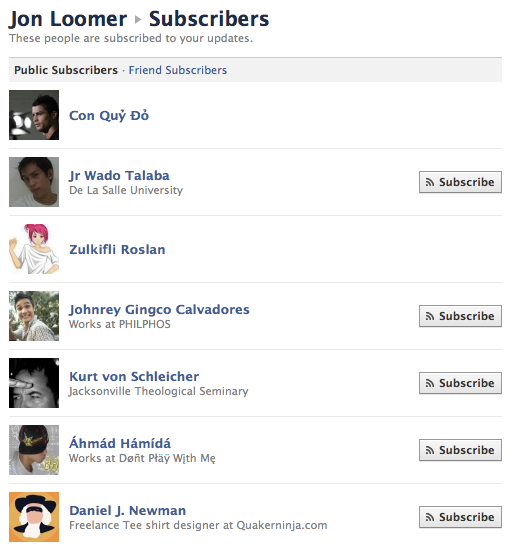 These are the "famous" people subscribing to my udpates.

There are no famous people here. No supermodels. No hall of fame athletes. No world leaders. They may not even speak English.

I guess it’s a little creepy, but at the same time they’re just viewing my public updates. So… A little disappointing so far, but what should I expect?

Facebook immediately had some recommendations of people for me to subscribe to, and I chose seven people: The two Zuckerbergs, three other people from Facebook, Robert Scoble and Jennifer Van Grove from Mashable.

They’ve found their way into my news feed. It’s cool, I guess. I will say that it does feel a bit voyeuristic. Even though they allow public comments on their posts, I feel out of place doing it. Similarly, I’d probably be weirded out if someone I don’t know comments on one of my public posts.

Then again, this could just be something we all need to get used to. 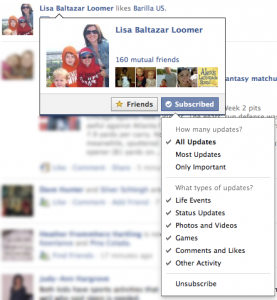 An example of subscription options for friends.

In theory, this could be a nice little change. I am now able to set the levels at which I’d like to follow my friends’ updates: All Updates, Most Updates and Only Important. You can also unsubscribe to a friend entirely while remaining their friend. Interesting touch.

What I really like about this change is that you can update a friend’s subscriptions level anywhere you see their name. You can do it on your own profile, where there is a link to a list of Friend Subscriptions. But you can also just hover over the link of their name. I’ve used my wife’s as an example to the right. You can click the image for a close-up.

Also, you’ll notice the subscription button looks different depending on the level you’ve chosen. Here they are:

Here are the various buttons based on subscription level. 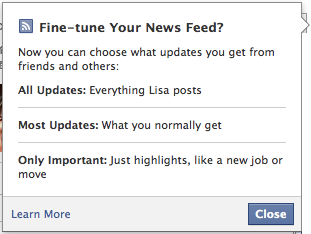 On the surface, it’s not all that complicated. But, I’m not yet comfortable with the definitions of “Most Updates” and “Only Important.” The definitions are to the right.

I know that there have been dust-ups before about Facebook not showing everyone’s updates. I’ve never completely understood why that’s the case. So while they say “Most Updates” is what I “normally” see, I don’t know how they determine what I do or do not see, and I don’t know how much I’m actually missing. Since “Only Important” only includes job changes and whatnot, I’m guessing that cuts out any status updates, photos, etc.

Of course, if you want to get even more granular, you can choose exactly the type of content you want to see from an individual person (see the image further up top): Life Events, Status Updates, Photos and Videos, Games, Comments and Likes, and Other Activity. That seems to be pretty straight forward (though I’m not sure what “Other Activity” would include), and it could be helpful.

I set aside some time today and went through every single one of my Friend Subscriptions to set everyone at All Updates, Most Updates, Only Important and Unsubscribed. Here is how I made my decisions:

All Updates: There actually aren’t many people in this group. Nothing personal at all, but if Facebook says the default level is “Most Updates” then I don’t really have a problem with what I’m seeing so far. But I set a few select people to the very top, and they aren’t always my best friends. Just people who provide really cool information.

Most Updates: For the most part, this is where people are. You’re cool. You don’t annoy me. Good stuff.

Only Important: This is reserved for the people I am close to but can’t stand reading their stuff. There aren’t many of them. But… I feel like if something important happens, I should know.

Unsubscribed: This is me being a chicken and cutting out everything they do from my feed instead of just unfriending them. This is reserved for the weirdos whom I don’t know anyway. There are a few of these. Who are you? Easy solution is to unsubscribe.

Quick note here: I’ll be covering the new Lists in the coming days. How we handle those is different. Lists are more about what people see my updates. Subscriptions are about what I see. They don’t always match up, though they often do.

I like the idea of subscribing to people who aren’t friends. And the thought in theory that a non-friend can subscribe to my public content is cool as well. Hopefully someone interesting will subscribe to make it seem worthwhile.

It’s too early to tell if the various levels of subscriptions of friends is valuable. I won’t know until I’ve had a few days to use it. We’ll see if I interact any differently with my news feed.

That said, the UI is more user friendly than a typical early launch Facebook feature. You aren’t forced to go to a specific page to do it. Anywhere you find the person’s name, you just hover and select. I’m sure there will be a lot of adjusting on the fly, and that’s cool.

The question, of course, isn’t whether I’ll use it. After all, I’m one of the 5% who actually uses lists. The question is whether the mainstream will accept it. I think they will since the feature isn’t buried like lists were.

There may be confusion, though, from users regarding the difference between lists and subscriptions. I often had to remind myself that I was setting this for what I will see and not for what I will share. This is important because if there’s any confusion there, people could unwittingly mess up their privacy settings.

One other item is ease of use. For the longest time, I’ve seen the request for check boxes or radio buttons. This would seem to be a good time to use them. When I have a full list of friends, it would be great to have four columns of radio buttons with the various levels of subscription options. Boom, boom, boom, boom all the way down. Instead, it’s still a rather laborious process.

Overall, it’s a nice little touch. I think people will use it since it isn’t buried. The real question will be how useful it is. Right now, it’s too soon to tell.