Moments after clicking on the button to allow subscriptions, the first person subscribed to my public Facebook content. Then another. Then a few more.

At first, I felt kinda special. Yeah, that’s right. These people dig me. Sure, there’s no reason for them to have found me so quickly. Sure, it’s not even clear if some of them speak English.

Suddenly… I felt a little dirty.

I don’t know these people. But worse than that, I highly doubt they have any interest in my public content. 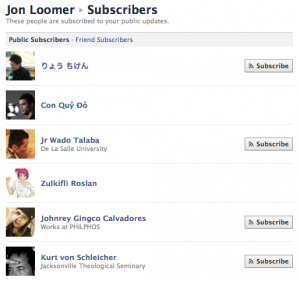 Why? Because I know how many people they’ve subscribed to. I have seven subscribers and the three who publicly display the information have subscribed to an average of 602 people. No, not friends. Subscriptions.

The feature just opened and they’ve subscribed to 602 people. Can you imagine that? I can’t. Once I found out I could subscribe, I thought cool. I looked at those whom Facebook recommended and subscribed to seven. But 602??.

Of course, once you sit down and think about why they would do this, it all makes sense.

One thing I hate about Twitter is the numbers game. If you are unfamiliar, it’s simple: One of the top metrics we use to measure influence is number of followers. There’s a pretty simple trick to getting a lot of followers: follow a lot of people.

It’s not just a matter of following a lot of people. It’s that so many people do it with no intention of reading the stuff posted by the people they follow. If you don’t follow back, they have no use for you. They unfollow. They just want the numbers.

So why did these strange people subscribe to me? It’s pretty obvious: They want me to subscribe back.

All Updates
Most Updates
Only Important

If subscriber number becomes a numbers game, this is simple. Subscribe, then check “Only Important;” then uncheck each of the four types of content.

I have no doubts that, like with Twitter, someone will release a tool to measure influence on Facebook. And I have no doubts that one of the metrics that will heavily weight that score will be number of subscribers. And as a result, thousands of fools will take advantage of that and try to manipulate the score.

Or at least, I would bet the lint in my pocket that’s what these seven people were banking on.

Thing is, it’s even easier on Facebook. As I noted, four of the seven people who subscribed to me hide the number of people they subscribe to in their public profile. So do they really care about my content? Or am I just a number? That isn’t entirely clear.

That’s kinda the kicker here. On Twitter, you can follow 100,000 people, but everyone knows you did it. It’s on your profile. You wear it. But on Facebook, you can subscribe to 100,000 people and no one needs to know.

And maybe… Maybe that’s why a measure of influence isn’t possible on Facebook. Maybe that’s the beauty here. Maybe the ability to pick and choose what is displayed makes it too difficult to determine true influence.

And that would be just fine with me. Personally, I don’t care who is “most influential” on Facebook. Just lead me to the best content.