Facebook hosted a press event on August 6, and a main focus was sharing changes and tests involved with the News Feed. Following is what you need to know, including:

Story Bumping is a tweak to Facebook’s sorting algorithm that will begin surfacing content you missed to the top of your News Feed.

For example, you log into Facebook at 9 am. You scroll down and see 50 stories. You miss a story that was beyond your scrolling. That story continues getting lots of comments, likes and shares, so the next time you check into Facebook that story is shown at the top. 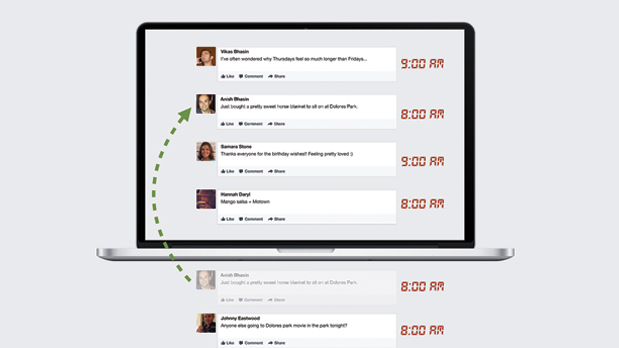 As TechCrunch points out, Facebook won’t necessarily be surfacing new content to the top of your News Feed, but content that is “new to you.” This is expected to keep your News Feed fresh instead of continuously showing the same content to you.

Is it effective? Facebook has tested this change with 7,000 daily users during July. Here are the results:

Facebook reports that without these changes, the average user read 57% of the stories in their News Feeds, failing to scroll to see the other 43%. These changes resulted in an increase of stories seen to 70%.

As of publication of this post, Story Bumping has been rolled out to 99% of web users and the rollout to mobile is beginning.

Last Actor considers the 50 people and Pages you’ve interacted with most recently when surfacing content. Interaction, according to TechCrunch, includes viewing someone’s profile or photos (presumably any clicking) and liking their stories. 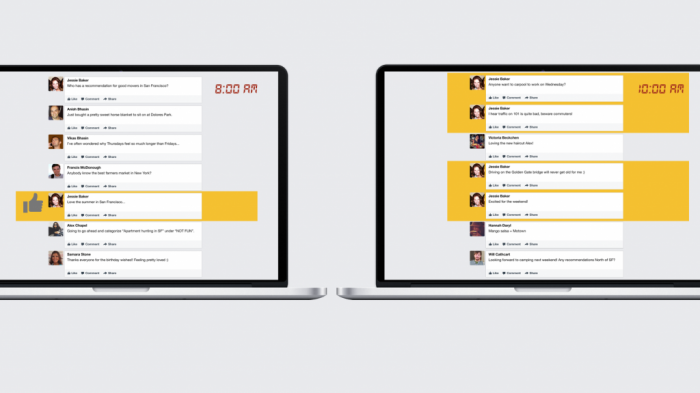 Backstrom says that this was less impactful than Story Bumping, but it still resulted in a positive change. He explains how this works (again from the AllFacebook post):

Essentially what we wanted to do was try and capture your current state of mind as you’re consuming News Feed and using Facebook. A lot of the important symbols that we have in feed ranking are kind of long-term things: what’s my relationship to my friends and that kind of thing. We wanted to make this more real time. ‘What am I consuming right now?’ So we built this new signal where we take into account the most recent interactions that they’ve had.

The Last Actor algorithm change has been rolled out to all users.

This is something that has received a lot of publicity, but prematurely (more on that later). Facebook is testing tweaks to the algorithm that will consider showing rapid posts (often in response to a live event) in order.

The goal here is to overtake Twitter as the go-to place for following real-time events online while still showing you the content you care most about.

This change is being tested, but is not live.

What it Does and Doesn’t Mean

For me, the biggest news here is Facebook’s new transparency about how they sort our content and any changes they make. This is a very nice development going forward.

But I actually found the news about Story Bumping and Last Actor to be very minor. If you had shown me any of the articles written by Facebook for Business, InsideFacebook, AllFacebook or TechCrunch and removed the labels “Story Bumping” and “Last Actor,” I would have assumed this was old news.

Facebook resurfaces older content that is getting a lot of engagement? Yeah, I thought they were already doing that.

Facebook shows more content from people you have been interacting with lately? Yeah, I thought they were already doing that, too.

But Facebook undoubtedly is putting more focus on both of these things — to the point that they are actually branding the features.

Of course, the feature that everyone is freaking out about is “Chronological by Actor,” a test tweak that isn’t even live. During the past 24 hours, I’ve repeatedly heard that “EdgeRank (the external name for Facebook’s sorting algorithm) is dead.”

Is Facebook tweaking their sorting algorithm? Absolutely. But there’s still an algorithm. So whether it’s called EdgeRank or FreakRank or something else entirely, Facebook is still deciding what you do and don’t see based on several factors.

And if you need more evidence as to whether Facebook is about to strip away all sorting to go straight Twitter on us, check out this quote from Facebook’s VP of Product Chris Cox (quoted by TechCrunch):

Philosophically, Twitter and Facebook are still quite different in their product assumption and product promise. We’ve always been committed to ranking, just given the core demand of ‘I don’t want to miss stuff.’ Twitter has built a whole ecosystem around not ranking and showing things in real-time. I wouldn’t over-pivot on this feature. We’re not changing the core philosophy.

In other words: Chill, people!

The Goals of News Feed

The Facebook for Business Blog recently stated that the average user has a potential 1,500 stories from friends and Pages that they could see in a given day. While users have clamored for an unfiltered News Feed, tests have shown that this results in lower engagement.

The goal of News Feed is to deliver the right content to the right people at the right time so they don’t miss the stories that are important to them. Ideally, we want News Feed to show all the posts people want to see in the order they want to read them.

Facebook does this by taking social cues from its users. Content is sorted, shown and hidden based on what a user likes, hides and interacts with.

Following are examples of signals that users give that help determine what they see (again from the Facebook for Business blog):

The result is trimming those 1,500 daily stories down to 300 that you (hopefully) care about.

Possibly the most important takeaway here is that Facebook is going to begin being far more transparent about how they sort your content and any changes they make going forward:

We are continually working to improve News Feed and from time to time we make updates to the algorithm that determines which stories appear first. We’ve heard from our users and Page owners that we need to do a better job of communicating these updates. Starting today, we’re going to try and change that. News Feed FYI blog posts, beginning with this one, will highlight major updates to News Feed and explain the thinking behind them.

Facebook has always been very secretive about how they sort content, and this has led to a great deal of confusion. Hopefully, the “new Facebook” will be more forthcoming and cut off some of the conspiracy theories before they start.

What do you think about these changes, tests and tweaks? Let me know in the comments below!