UPDATE (September 6, 2012): Unbelievably — and yet, very believable — this hoax has made a comeback. It’s been a year since the first time I wrote about it. Now, it’s returned in a somewhat altered form:

To all my contacts, friends, I request you that with the recent changes in FB, now one can see things from people who are not in your contacts list. Just because a contact of yours makes a comment or “likes” in some activity of that person. I do not want people to contact me, and would like that they donot read and see all my comments and stuff. But I can not change this myself because facebook has configured it this way. But you can do it for me.

PLEASE place your mouse over my name above (do not click), a window will appear and move the mouse on “Friends” (also without clicking), then down to “Settings”, click here and a list will appear. Click “Comments and Like” and it would thereby remove the CHECK. By doing this my activity amongst my friends and my family does not become public. A Thousand Thanks! Paste this on your wall for your contacts, if you care about your privacy!!!

Nothing has changed here. Read below…

You’ve probably seen a variation of the following in your Facebook News Feed recently:

Do me a favor: please hover over my name here, wait for the box to load and then hover over the “Subscribe” link. Then uncheck the “Comments and likes” choice. I would rather my comments on friends’ posts not be made public. Thanks** Then repost if you don’t want your EVERY MOVE posted on the right for everyone to see, I’ll do the same for you if you want. just click like. Thanks 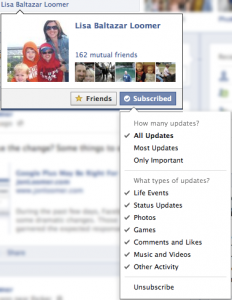 Yep, you can adjust the type of information you see from each person, but it's not going to help for this purpose.

The source of this is simple: People are freaking out about their every activity showing up in the Ticker. They see activity of their friends being surfaced that they aren’t used to seeing. Then they realize this same type of update about their own activity is out there.

So a quick fact check here…

I would rather my comments on friends’ posts not be made public.

Are your comments public? That depends on your friend’s privacy settings. If it’s a public post, yes. If it’s viewable to only their friends, then their friends can see the comment. Take a look at two of my posts as examples…

Two things with this, though: 1) Even if it’s not public, a lot of people may see it; and 2) The person posting the item can always change it to or from public.

In other words, just be smart about your comments on other people’s posts. It doesn’t mean you shouldn’t comment. Just don’t say anything you’ll regret. While you control who sees your own posts, you can’t do anything about who your friends choose to see their own posts (which includes the comments on those posts).

But maybe it’s just a difference of opinion on the definition of “public.” Maybe the concern is that your own friends see every move you make. So let’s assume that’s the concern.

Well, the “fix” above may prevent every friend who follows your instructions from seeing your comments and likes in the Ticker, but let’s be realistic here. If you have 200 Facebook friends, how many of them do you expect will actually do this for you? Five? Ten? Is it really worth it?

Are there specific activities you don’t want your friends seeing? Maybe you shouldn’t be participating in them.

3) Be very skeptical of any panicked post on Facebook that asks you to copy and paste it into your status. I honestly can’t think of a single time one of these posts was accurate. Please, think it through. Ask yourself if it makes sense. In most cases, it’s someone who has good intentions but doesn’t see the full picture. Do some research. Before you panic your own friends, make sure that there is first something worth panicking about.

What do you think? Have you seen this type of post? What’s been the general reaction?

UPDATE: As I read through the comments below about people who remain adamant that they can see items in their Ticker for friends posting on non-friend updates that aren’t intended for a public audience, it struck me… Is the confusion here about the type of update? Let’s go over a possible scenario.

And to be clear, if your friend allows you to see their wall, you can see anyone’s posts. It doesn’t matter if someone who is not your friend posts on your friend’s wall. You can see it because it is under your friend’s privacy settings. Everyone understands this, yes?

Is this possibly the source of some of this confusion? Because I can think of at least one of the scenarios mentioned below that is very likely to be a wall post, not a status update.