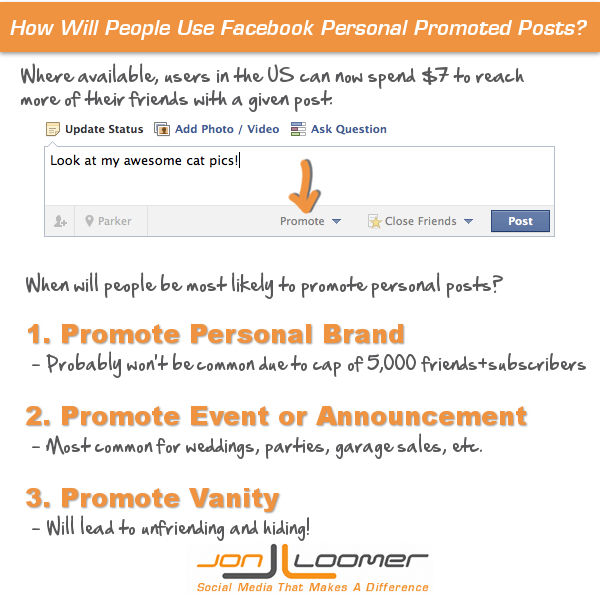 I typically avoid issues associated with personal use of Facebook entirely these days, focusing instead on how brands can maximize their business presence. But this issue has enough crossover that I wanted to take a look at it.

As you may know by now, regular users of Facebook can now pay $7 to reach more of their friends with a single post. This follows a similar Promoted Posts feature that was granted to brand Pages near the beginning of June.

This move falls somewhere along the spectrum between “Genius” and “Desperate;” but no matter how you define it, it is undoubtedly “Ballsy.”

Will users promote their posts? How will it change Facebook as you know it today? 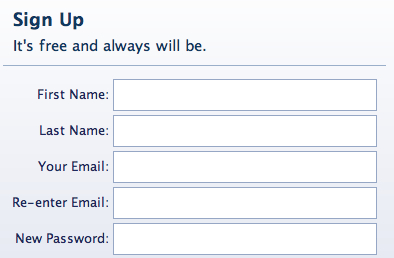 So is this move hypocritical? It certainly approaches a line, and whether this is a case of Facebook reneging depends on what happens to those of us who don’t promote.

If the addition of Personal Promoted Posts doesn’t impact my ability to reach my current friends without promoting my own posts, I don’t see this as blatant hypocrisy. For that to be the case, Facebook would either need to force me to pay for something I’ve been doing all along, or change the effectiveness of my current activity in an effort to make me pay.

So hypocrisy? Is Facebook rigged, as one writer from Mashable asserts? Not yet. As it currently looks, Facebook is adding functionality that will bring them revenue. But you and I can continue to not promote our posts and presumably have the exact same experience we’ve always had.

So why would someone promote a personal post if your friends already see those posts? Well, they don’t all see it.

You see, it’s never been the case that all of your friends see your post. This is a difficult concept for many, but it’s the way it is. Since 100% of your friends aren’t on Facebook 100% of the time (I know, it’s true!), you will always miss some — and probably most. EdgeRank also has an impact, though it’s not clear how much, on how many of your friends see a given post.

So someone can now pay to promote a post and appear higher in News Feeds of their friends. Higher up, of course, and it’s more likely to be seen. It can then be seen by friends who were not online when you originally posted it, and it can cut through any negative impact EdgeRank may have otherwise had.

So it is possible that Personal Promoted Posts can be added to the mix without impacting non-Promoted Posts. It may not be reneging on Facebook’s prior promises.

But that may not matter. Sometimes, it’s all about perception. And Facebook users are a touchy bunch hell bent on negative perception and conspiracies. It will be interesting to see where this one goes because if anything could be an example of Facebook pushing their luck too far, this may be it.

When Users Will Promote Posts

In all likelihood, Personal Promoted Posts will be used in the following cases:

My immediate thought was that this would be great for celebrities and other individuals who have a high subscriber count. However, this feature is limited to profiles with under 5,000 subscribers and friends.

That actually makes a lot of sense. Facebook doesn’t want people using profiles for business purposes. So whether you’re a celebrity with a personal brand or a company incorrectly classifying yourself as a person, Facebook would rather you use a Facebook Page.

So really, I think we can cross off the first one. If you use it to promote your personal brand, it’s a feature that will no longer exist once you get to 5,000 subscribers. So there’s really no reason to start relying on this. Just convert your profile to a business Page already if you’re ever going to use Facebook for business purposes.

Facebook envisions this will be used most for promoting events and announcements, and I tend to agree. If someone’s throwing a party, getting married, has a birth announcement or is holding a garage sale, they may want to reach more of their friends. In that case, I can see some value in promoting a personal post.

Beyond that, you bet there will be another group that falls under a single classification: Vanity and Expendable Income.

If you really want people to know about your new haircut and you have money to burn, you may want to use this feature, too. Your friends may hate you for it, but it’s a group that you can’t forget.

I’ve thought quite a lot about this. Some think this will be the ruin of Facebook. I tend to think that we’ll barely notice a difference.

Why? People will only promote their posts if it’s beneficial. Let’s consider the factors at play…

So they promote another post. Then another. And they begin promoting vanity posts.

The result? The benefits begin to disappear. You now need to pay $7 to reach as many people as you could before Promoted Posts were launched because far fewer of your friends choose to see your dribble.

I know what you’re thinking: But brands have to deal with Fans hiding posts and unLiking their Pages.

True! But a huge difference. As a brand, you don’t know most of your Fans personally. And you are constantly looking to expand your reach since you will never reach saturation point of people who may be interested in your product or service.

But friends? True friendships don’t grow on trees. If your friends begin to hide your posts and unfriend you because you’re too self-promotional, you can’t just go out and get new friends. Your Facebook life is kinda screwed.

So it’s possible that we’ll see some negative blowback in the beginning. Some users will abuse Promoted Posts.

But users will quickly realize there’s a balance. I’m willing to bet that when all is said and done, this feature will rarely be used and the post-Personal Promoted Posts world won’t look much differently.

Will You Promote Personal Posts?

I know that I don’t expect to promote my own personal posts, but I guess there’s always a scenario I can’t account for. Regardless, it will be incredibly rare, and I do not expect to see my friends using the feature much, if at all.

How about you? Will you use Personal Promoted Posts? When?