Two revelations of Facebook tests or rollouts could significantly impact the way that business is done on Facebook. 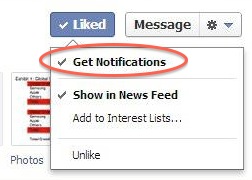 We are currently rolling out the ability for people to receive notifications from specific pages, friends or public figures that they are connected to. This feature will help people keep up with the people and things that they care about most.

This statement is somewhat confusing since users can already get updates when friends create posts. This is done by adding them to their Close Friends list. By default, users receive notifications when those friends are active.

But it’s entirely possible that this new feature would apply to not only all Pages, but subscriptions and other friends. You may not consider Bob a “close friend,” but for whatever reason you want to be alerted when he posts something.

This would presumably then make it so users would never miss a single post written by their favorite brands.

Will people use it? What does it mean? I’m going to get to that…

Lisa Jenkins reported on her blog seeing a new Pages Feed option within the Pages navigation to the left of the News Feed.

Half way through the day, I noticed something in the PAGES section of my Profile. Just above the Like Pages link, there was a brand new Pages Feed link and when I clicked on it, there were status updates from every Page I’ve Liked. Every. One.

It would presumably work like this, though I can only guess at this point based on Lisa’s description. 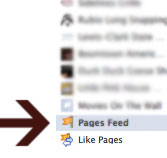 This was confirmed by one of her readers who also has the feature. I have not seen this or the Page notifications feature in action.

This should make some Facebook Page admins happy who have been screaming about not being able to reach their Fans. At least, you’d think…

I’ve got nothing but speculation right now since I’ve yet to see any of this in action. But here are a few thoughts…

1) This is a reaction to Page backlash. Not only is it pretty clear that this is Facebook’s reaction, but it’s essentially Facebook calling the bluff of outraged Page admins. Why? Let me explain…

The claim is that Fans who desperately want to see every post we make are just as outraged as we are.

They provide two tools: One for notifications of when you post and one to be able to see everything you and other Pages post.

If people actually use this feature, Facebook comes out ahead because everyone’s happy. If no one does, Facebook proves their point that most brands weren’t interesting enough in the first place to warrant regular visibility in News Feeds.

2) Notifications are annoying. Back when the Close Friends List was added, I first became exposed to this seemingly random notification process. Everything my friends posted resulted in an alert. I like these friends a lot, but come on. It was freaking worthless.

3) No one will use the Pages Feed. Look, we know where this is going, right?

Facebook provides tools that could make everyone’s lives easier. Whether it’s privacy settings or friend lists or Interests Lists. Very few people use them. The rest complain about how much Facebook sucks because of X (problem that could have been solved by using one of these things).

The truth is that we’re lazy. There once was an option to view only Status Updates. People stopped using it and Facebook phased it out. There’s currently a filter to view your News Feed by Most Recent posts. It’s a good way to catch more content. Yet, no one uses that either.

You could use Interest Lists to follow all of your favorite Pages already. You could add that to your favorites and view it as an alternate News Feed. Some savvy users do that. Most don’t and will not.

So do you think that users will now view this alternate News Feed, even if it’s created for them? I have my doubts.

4) Will this mean even fewer Page posts in the News Feed? That could and should be the fear. By creating an alternate News Feed for Pages, one could envision the current News Feed being repurposed only for friend content, minus promoted Page content.

That’s not such a crazy thought.

One of the reasons Facebook created EdgeRank in the first place was to make News Feed manageable. It’s not intended to be like Twitter. But activity continues to increase and the audience continues to grow. Eventually, it just doesn’t scale in its current form.

One solution would have to be separating friend and Page content. That, then, would provide brands further motivation (one would argue) to pay to get into that now exclusive News Feed.

5) Would this create more or less visibility for brands? Want to allow your Fans to see all of your posts? Be careful what you wish for.

Let’s say the News Feed in its current state remains as it is. You aren’t harmed there. But users can now view all posts by all of the brands they Like within the Pages feed. Does that help you?

I like more than 200 Pages. Let’s assume that your brand is one that I regularly interact with. As such, Facebook surfaces your content to me more often than that of 99% of the Page content within the News Feed.

But within the Pages feed, the content I like most would be swallowed up by the content I don’t care as much about. A ton of competition for eyes.

Would I actually see more of your content this way? I doubt it.

It’s why I continue to contend that if Facebook turned off EdgeRank, the only brands that would benefit would be those that create bad content. They’d finally get seen as much as the good content. But overall, every piece of content would be seen less.

6) The truth will come out about how users feel about brands. Many brands should feel uneasy about these potential changes. If you are putting your visibility in the hands of the users, you can no longer blame EdgeRank if no one sees your content. If your Fans don’t take action to see your stuff more often, it’s pretty clear how they feel about you.

The reason I Like many of the Pages I do is simply out of expression. I “like” that. But I don’t really care if Modern Family, for example, ever writes a single post that shows up in my News Feed. I might read it. But I won’t miss it if I don’t.

This sounds like an indictment on Facebook marketing, but it’s not. People don’t like commercials, but they work. Your Facebook marketing should definitely be more enjoyable to customers than a commercial. But don’t expect them to cause a riot if they don’t see everything you write.

7) Could this lead to the end of EdgeRank? A lot of people hate EdgeRank. A lot. I’m neutral. But if the Pages feed becomes a permanent solution, it makes sense that EdgeRank’s days could then be numbered.

You would then see all of your Page content, when you want to see it. With that taken care of, wouldn’t the next demand be to see all of your friend content? You give them an inch…

But there’s another reason why EdgeRank may no longer be needed. If Page content actually moves completely to a Pages feed (NOTE: PURE SPECULATION), your friend content would then be freed up and much less active. Facebook wouldn’t want that. Activity is good.

I could see EdgeRank being either loosened or removed completely as a result.

But we’re getting way ahead of ourselves here…

8) Facebook won’t kill business on Facebook. Everyone needs to understand this. Nothing is more important to the success of Facebook as a public company than the success of businesses on their platform.

Will Facebook test the limits? Absolutely. They are going to stretch us as far as they can to see what we’d be willing to put up with and pay for. But they need us to find success on Facebook.

Where do you think this is headed? Would you use either of these features?