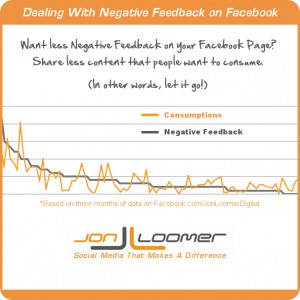 We all want to be “liked.” And on Facebook, we take that literally. People lie, cheat and steal in an effort to gain more Likes for their Facebook Pages.

So it’s no surprise that we’re a little sensitive when we dig into our Facebook Insights and fumble through the Negative Feedback columns.

Listen to me: Don’t lose any sleep over it.

I’m not going to say that it doesn’t matter at all. It matters some. But you need to have context.

Time for an example…

I pulled Insights for a 93-day period. On August 15, I had the most negative feedback of any day. I received 22 bits of negative feedback that day, seven more than the day with the next highest total. I also received eight Unlikes, tied for most during the period.

That’s the day when I went for the trifecta. I posted pictures of dead puppies, ranted about politics with no concern for accuracy and posted 874 times in a single day. I was on a mission to break a record.

Not really. There was nothing out of the ordinary that day. But for whatever reason, my negative feedback was comparatively high.

You know what else was really high that day? Reach. I reached the second most people of any day measured.

What else? Both Consumers and Consumptions, which were at the third highest level of any day. These measure the amount of clicks and people who made clicks on a given day.

You get where I’m going here? It’s all relative. My negative feedback was higher because I was reaching more people. And the fact that I got an incredibly high amount of engagement tells me that I may have been on the right path.

But let’s look a little deeper…

Of the 12 days that received the most negative feedback of the 93 measured, all had above average Reach, Consumers and Consumptions. All of them.

In fact, all were in the top 25%. It shouldn’t be surprising that the post that received the most Reach, Consumers and Consumptions was also in this Top 12 of Negativity.

Now, let’s turn it around. People must really like the content that receives the least negative feedback, right? Eh…

In the majority of those 24 days, the lack of negative feedback was a symptom that my posts weren’t reaching anyone and no one was engaging with my content.

Wanna know how to get less negative feedback? Don’t post anything. Or create boring posts that barely anyone sees.

You can’t evaluate this type of information in a vacuum. I’d be more concerned if I received a high amount of negativity for a post that reached fewer people. That would be a high level of hate.

But in the end, I have a hard time saying these numbers mean much of anything. First of all, negative feedback and Unlikes are okay. If you are running your business and your life appropriately, not everyone will like you. Some people will hate you.

If you don’t get any negative feedback, you aren’t doing your job.

Focus on one thing: The consumer.

Sound stupid? It’s not. If you’re always sharing content with your consumer in mind, screw the people who don’t want it. They aren’t your target audience anyway.

Know what your Fans like and want. Ask them. Get their feedback. Cater content directly to those people.

If you posted something without their best interests in mind, you know it. You shouldn’t need a metric to tell you that. If you have a conscience, that’s all the negative feedback you’ll need.

How do you deal with negative feedback? Let me know in the comments below!