When I called Facebook on Monday to ask why the company had changed the settings for the display of people’s email addresses without their permission, potentially violating users’ privacy, I was told that the swap was not a “privacy” change, but rather a “visibility setting” change.

I offered a genuinely confused response to Jaime Schopflin, a Facebook spokeswoman I spoke with. “Um, isn’t changing the visibility of something actually changing the privacy setting?” I asked.

“No,” Ms. Schopflin said, explaining that they are two different things.

To Facebook, the words privacy and visibility may be as different as peas and carrots. But Facebook users and one linguistic expert I talked to seem to disagree.

Look, I think that Facebook’s decision to swap out your regularly featured email address on your profile with your Facebook email address was silly, unnecessary and poorly communicated. But… Facebook is absolutely right.

When you write a Facebook status update, you can determine what group or groups of people can see that information. If you choose not to write publicly, you can limit your audience to Friends, Friends Except Acquaintances, Close Friends, custom lists or even “Only Me.” 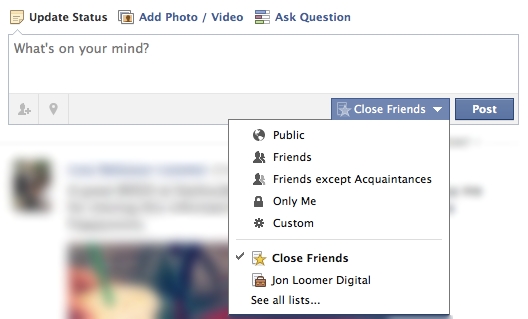 You can similarly control which groups of people can see the details of your Facebook profile. You have quite a bit of granular control here, allowing you to throw different types of information into different privacy buckets.

Here I am, controlling the privacy setting of my Facebook.com email address: 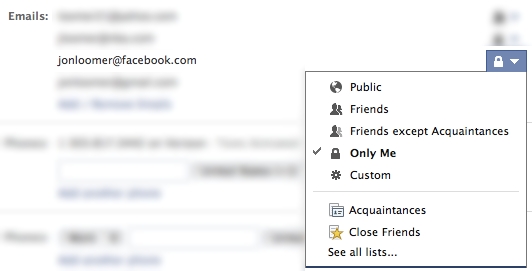 I set the privacy of my Facebook email address to “Only Me.” In other words, if you aren’t me, you can’t see it.

Facebook also allows you to feature and hide from view certain things on your profile or Timeline. Here’s an example of that with my email address…

The difference is that privacy settings determine which groups of people can see a piece of content — no matter how it may be surfaced.

Let’s use my status update as an example. It doesn’t matter if someone else comments, likes or provides a direct link, if you aren’t on the list you will not be able to see it. My privacy settings follow that piece of content everywhere.

With visibility, it’s just a matter of determining what you are featuring on your profile or Timeline. This may be a piece of content that you’ve already determined could be seen by Group X. You have a lot of stuff on your profile, and some of it may not be important. That doesn’t mean you’d freak if X person saw Y piece of information. You just don’t want it on your profile.

Why I Was Not Impacted

When Facebook made the change, my Gmail address was no longer featured. My Facebook address was now “featured,” yet I was the only one who could see it.

The only thing that outwardly happened was that my Gmail address could no longer be seen by my friends. So in a way, things temporarily became (at least in appearance) more private as a result (though I’m sure there were ways my email address still could have been surfaced to the group of people allowed to see it).

Why This is Silly

Is it a breach of privacy if your previously hidden Facebook email address (that was set to Public) is now featured on your profile? Nope. But there are other reasons I think this entire situation is silly.

Let’s talk about what your Facebook email address actually is…

No matter my privacy or visibility settings, my Facebook.com email address is no secret. You can easily figure it out.

Should I freak out about this? No way. Why, you ask? Because there’s a privacy setting to determine who could actually send me a Facebook message in the first place.

Are you confused? Do you think that a Facebook message and an email are two different things? They aren’t, and that’s the second reason this whole thing is silly.

If you were to send me an “email” through this address, all that happens is that I get a Facebook message from you. It’s not really an email at all.

So in conclusion, Mr. Bilton of the New York Times may be confused, but Facebook is correct. There is a difference between “Visibility” and “Privacy.”

There was no privacy breach. And really, this whole dust-up was silly and unnecessary, but for some reason Facebook felt that our Facebook email addresses — something that no one uses, and certainly no one would care about while on Facebook — were important.

What do you think? Was there a privacy breach?