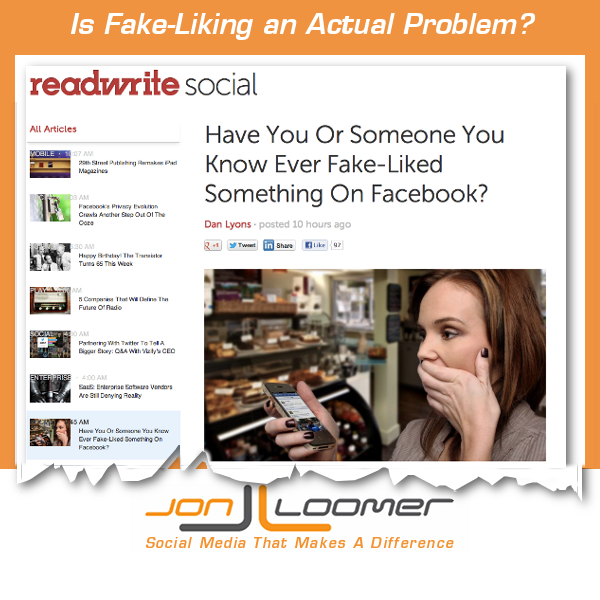 The evidence is pathetic.

No proof that any person who has since passed away liked a page. It’s only that their profile hasn’t been memorialized and Facebook surfaced in an ad that they like a particular page to a friend.

No proof that anyone was stuck with a like that they didn’t make. Only “I never liked it!” Sure, you are repulsed by the product. But there’s no proof that this wasn’t user error or a simple misclick.

Is it mysterious? Maybe. Does it mean foul play? Provide the evidence.

Careless writing. No proof, only conspiracies. It feeds off itself through suggestion. You suddenly think this is a problem, so you look through your likes. You notice a page you don’t remember liking and you blame the Facebook gods.

I went through one year of my likes. Nothing suspicious. Nothing. But for some reason, I’m the exception.

This is what I want: The smoking gun. Scientific proof. An actual experiment. You have figured out that this happens under X conditions. You don’t have to prove why it happens, only that it does. Until you do that, your content is fluff garbage that inspires the easily excitable.

Example #1: Show me Profile A doesn’t like Company B. Show me how when you go to Company B’s website, a Like is mysteriously added to Profile A.

Example #2: Show me Profile A doesn’t like Company C. Show me how when you install Company C’s application, a Like is mysteriously added to Profile A.

Example #3: Show me Profile A doesn’t like Company D. Show me how when a Sponsored Story (unlicked) appears on a mobile device, a Like is mysteriously added to Profile A.

Or something like that. I’m just pulling scenarios out of the air now. Don’t start rumors that any of these are possible.

“But I don’t have this example! It’s a crazy mystery!” Then take some responsibility and don’t write about it until you have something with a little substance behind it.

I have no idea how anyone could be planted with a fake and unintended like that does not somehow involve user error. Until you actually show evidence that it’s happening — and how it’s happening — your article is completely worthless.

We like a lot of pages. We make a lot of clicks. We aren’t perfect. We aren’t always careful. If you want evidence for that, just take a look at the millions who copy and paste hoaxes onto Facebook, or who get nailed with viruses because they click on suspicious links.

“Oh, that was a hoax? Better be safe than sorry and keep it going by spreading it to all of my friends! RIGHT??”

That’s my evidence that this is BS. Until I see something that is repeatable that shows me there is something else going on outside of user error, I won’t buy it. Facebook users have far too great a history of careless sharing and clicking to ignore.

I’m open to the evidence if you have it. I’m not closed to the possibility that third party apps or even Facebook itself could be the cause (though that would seem unlikely). But show me.