[The following is a guest post by Brian Carter and Lynda Harvey-Carter].

You may be paying to promote your Facebook posts, but do you want to pay just for people to see them? Or do you want interaction, traffic and conversions?

Let’s back up for a second, and make sure we’ve got a firm foundation here.

Hopefully you’ve gotten over the fact that your Facebook page won’t organically reach all your fans when you post. You’ve accepted that only 1% of your fans go back to your actual page (monthly) and that only 10-15% of your fans see your page’s posts in their News Feeds.

You now just want to make sure more people see your posts. Promoting Facebook posts is critical. Most of the brands we work with get from 10X to 50X the reach that they would from organic-only exposure.

So you start creating post promotion ads — maybe by clicking on “boost post” on the post itself… but then you realize that you don’t get a lot of targeting options.

If you show it to friends of fans and any of the fans have international friends, you may start getting interaction from people in countries you can’t serve with your business. You begin to wonder about the quality of these post views.

Maybe you hear about the Ad Manager everyone has access to and that you can show your posts to anyone, and be more picky about who sees them.

You Should Optimize For Interaction and Clicks not Photo Views

So you make the shift and begin to use Ad Manager [Editor’s Note: Or Power Editor!], even though it’s way more complicated. You’re creating ads that promote your latest post, and going back and creating ads to promote specific highly interactive posts.

But if you dig into the data, you realize that although some of these posts are generating a lot of what Facebook calls “actions,” a majority of those actions are “photo views.” But you want people to like, comment, share and click on your web links, so how do you avoid all those photo views?

Here’s an example from a campaignThe campaign is the foundation of your Facebook ad. This is where you'll set an advertising objective, which defines what you want your ad to achieve. of mine promoting an ebook I wrote with Marketo called “Contagious Content.” I have three ads running that target it to three different sets of interest targets.

When evaluating ads, you may only look at the cost per action, because it’s very conveniently calculated for you by Facebook.

But Cost Per Action is too general a metric because it includes photo views. If you optimize only based on Cost Per Action and keep only the ads with the lowest cost per action, you will sometimes pause ads that get you more valuable interactions per dollar. You’ll miss out on likes comments shares and clicks, in favor of more photo views.

The metric you want to see is Cost Per Non Photo View Interaction (CPNPVI).

In the image above, two-thirds of the actions in the last week were photo views.

If we look at the three ads in terms of CPNPVI, we get these metrics: 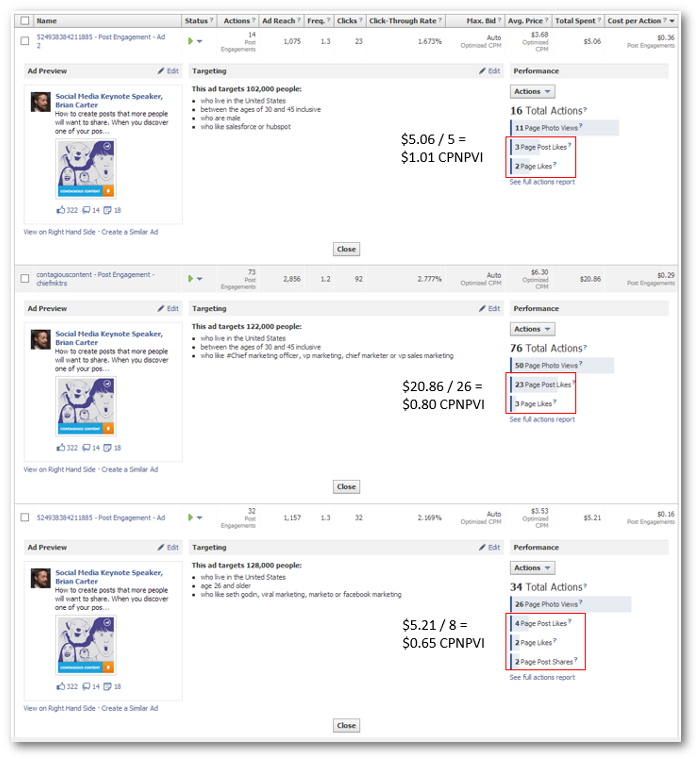 Coincidentally, here the CPNPVI lines up with the cost per page engagement, but it doesn’t always. You need to do this calculation to be sure. Otherwise, you may pause your best ads.

If you have the new reports interface, you can select a lot of metrics columns to make this easier. Edit the columns and add:

I typically don’t optimize for comments, which may confuse people who think social media is all about “conversation,” but I’ve found that comment discussions aren’t required to get interaction and conversions on Facebook. Likes are the easiest type of interaction to get.

I know, it’s a hassle… Facebook keeps improving, but you still have to get geeky with the metrics, and prioritize what’s most important to you, and then you can maximize your result per dollar.