Hey, welcome back to my experiment! I served you a Facebook ad because you have viewed 5 or more pages of my website during the past 180 days.

Country targeting can get complicated. If you go worldwide, Facebook is likely to focus on serving the cheapest impressions to get you the most actions. If you know that your paying customers come from a limited handful of countries, you probably don’t want this.

Even if you include 10 or so countries, there is a risk of Facebook limiting the distribution to countries where there is more competition (like the US, UK, Canada, and Australia).

On the flip side, though, you may also not want to limit yourself to only a small handful of countries. After all, how do you expand to other countries if people in other countries aren’t exposed to your brand?

With this campaign, I’m starting with a pool of people who have all visited my website before. That’s good! No matter who Facebook reaches, it’s going to be a quality user.

Of course, I still want some control here. Since I know that more than half of my paying customers come from four countries, I’d like to make sure Facebook shows my ads in those countries. So… what do I do?

First, I created an ad set for the US, UK, Canada, and Australia. The costs to reach people in these countries are pretty similar. These are the primary countries where my paying customers come from. 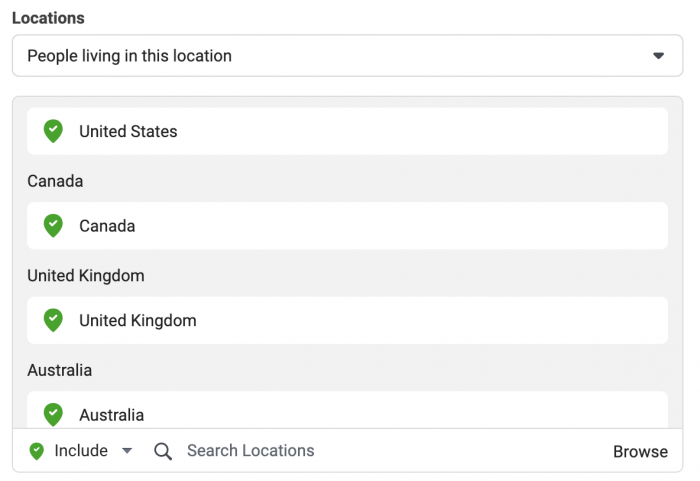 I also use people “living in” these countries (instead of the alternatives of including people traveling there).

I then create a second ad set that targets everyone in the world EXCEPT for those four countries. 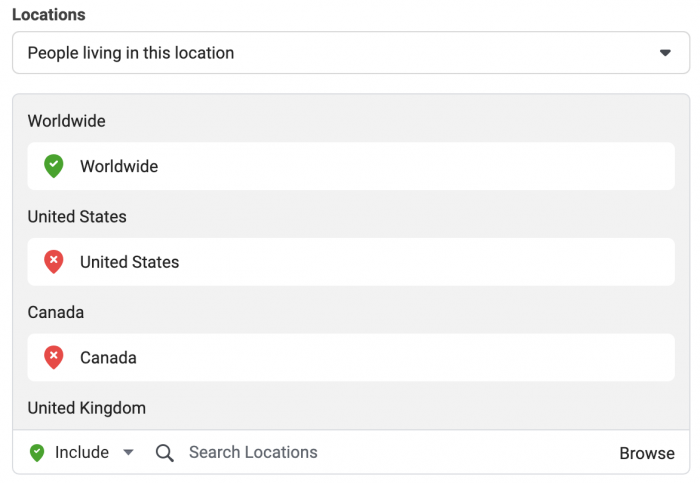 It’s actually a bit tricky to pull this off. You can’t just enter in all four countries and then select to exclude them. Once you get to the fourth country, it won’t let you do it because you have to target SOMETHING.

If you want to get more tips served to you, you’ll need to first qualify! The next threshold to hit is viewing at least six pages of my website in 180 days.