Hey, welcome back to my experiment! I served you a Facebook ad because you have viewed 11 or more pages of my website during the past 180 days.

In the last lesson, I talked about how I’m doing a completely separate experiment right now that inspired an adjustment on my thoughts related to frequency capping. Let me explain what happened and what I’m doing.

So, it all started in a really weird LinkedIn conversation last weekend. There was an advertiser who insisted that every page should reach 100-percent of their followers. Because they couldn’t, he’s running ads for every post they do, hoping to reach them all.

Honestly, I thought I was stuck in 2012. You may remember 2012, when it was revealed that you could reach “only” 16-percent of your fans. That inspired a firestorm of unrealistic expectations, and I spent a lot of time trying to explain how crazy it all was.

Anyway, that conversation got me thinking: What would it cost to actually reach all of your followers (we call them that now, not fans) with a single ad, but only once?

Initially, I thought the concept was crazy and potentially extremely expensive. But the more I thought about it, I realized that it could be constructed in a way that may not be expensive at all. And really, there may even be some logic to running one of these campaigns on a regular basis (not every post, though, that’s crazy!).

So, I created an ad… 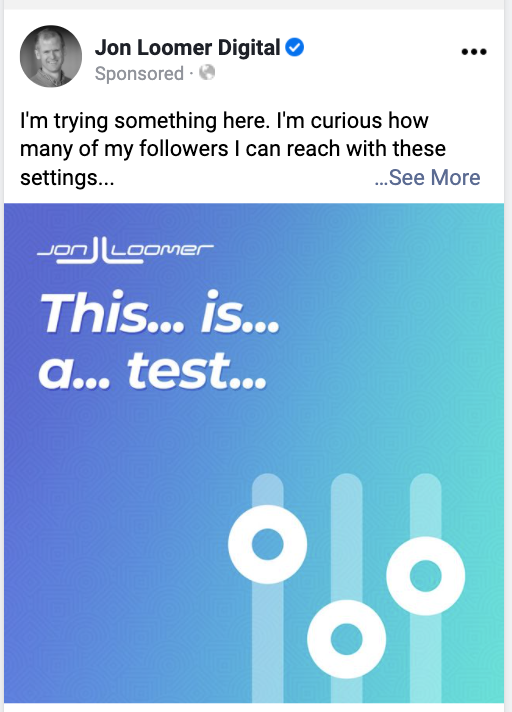 That ad would be shown only to my page followers via a custom audience. 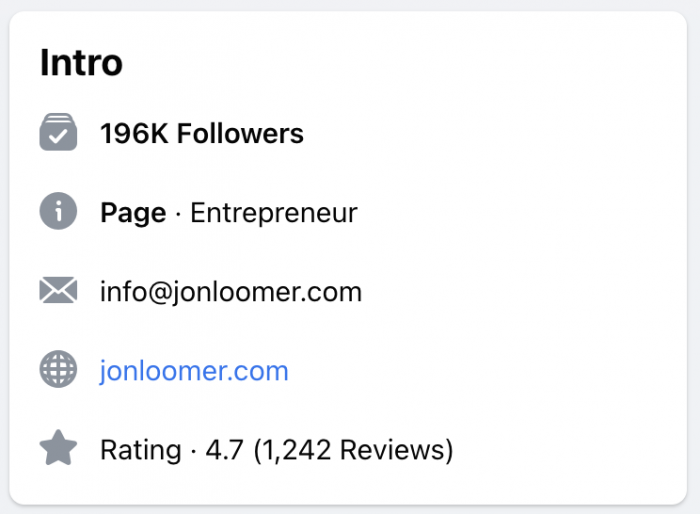 I’m going to ignore that for now.

So, I created a Reach campaign that targets that audience, and I set a frequency cap of 1 impression every 90 days.

This campaign has only been running for a little more than two days so far, but it’s been pretty interesting. In that time, I’ve reached 33,002 people for only $26.92 of budget.

Note that Facebook has shown it more than once to some people, but it’s minimal overage so far. It’s running at a minuscule $.80 per 1,000 people reached right now.

Of course, there are some easy explanations for that. Starting with an audience of 196,000 (or 150,000-ish), Facebook can start spending your budget on the lowest hanging fruit. They’re trying to reach the most people for the least amount of money, after all.

That means starting with the least expensive countries. But that’s not always the case. The main thing is that the people you reach will likely have minimal competition to reach them.

I have reached a handful of people from my core countries of the US, UK, Canada, and Australia (108, to be exact). Obviously a very small percentage. But that number is increasing every day.

And that’s what will happen. Every day, Facebook is going to go after my lowest-priced page followers. Since there’s a frequency cap of once per 90 days, the price will likely increase every day. And as we exhaust some of the cheaper countries, we’ll eventually end up with the most expensive people left over.

What will that look like? I don’t know yet, but I can’t wait to find out. I find it really interesting.

I see it as a potential solution. Some website visitors and page followers are more valuable than others. What would happen if you treated them all equally? While some are certainly less likely to buy, they may also be very cheap to reach.

Normally, Facebook skips people. Sometimes this is good, especially when using broad targeting. You optimize for a conversion and Facebook shows ads to people most likely to convert.

There’s a lot swimming through my mind on this experiment, and I’m watching the results closely.

In the meantime, it made me realize something. It didn’t make sense to use a frequency cap of 1 impression per day or even every 2 days for this experiment. The result of that is that Facebook will consistently return to going after the same (lowest-competition) people within my audiences.

I needed to extend the cap. Once I did that (as I discussed in the last lesson), the number of new people I reached increased immediately while costs dropped.

Part of it, I think, is that reaching the same people over and over can become problematic. Costs increase as frequency goes up.

But the main benefit here is obvious. I want to reach everyone, if I can, within a certain audience. I can’t expect Facebook will do that over the course of the campaign. And that was partly my misunderstanding of how it would work.

When you optimize for Reach, Facebook will try to reach the most people while spending the least. But that’s a daily optimization that repeats every day. The goal when you optimize for Reach (as far as Facebook knows) isn’t to reach the most people over the course of the campaign, but during that single day. Hence the daily repetition if I let Facebook do that.

I believe this experiment will be MUCH more efficient with a broader cap that prevents Facebook from showing these ads to the same people every day. Of course, we’re also dealing with smaller audiences. So there is a danger that if I’m too cute with the caps, the audiences may get too small and Facebook will stop showing my ads.

But these two experiments have me thinking about a couple of ways this new approach to Reach and frequency capping could be applied.

1. Drip Campaign. I can’t think of a better way to label it, so stick with me. Basically, it’s a matter of always promoting a product to a wide, but connected, group. It could be my page followers or email list.

Normally, you may optimize for an action. When you do that, though, Facebook will focus on one particular segment on that group and show the ads over and over. It’s not something you can do long-term.

Look at it instead as a single email that someone may receive from you. Once. I could target an ad promoting my Power Hitters Club to my entire email list with a frequency cap of 1 per 90 days. Everyone will see the ad once. It could conceivably be quite cost effective (though, I’ll know more when my other experiment completes).

The unexpected result is that the campaign becomes evergreen. The audience reached is different every day. You don’t have to do anything to change it. You can just run it and wait.

Once the other experiment is done, I’ll know how long it will take to reach all of my followers with a single ad, and I’ll know how much it costs. Then, I can simply start a regular “drip” ad promoting a single thing that is rotated every time it finishes.

2. Regular Exclusive Content Series. Once this experiment is done, I should have a better idea of the audience size that will still run without being “too small.” I’ll be able to isolate an audience of most engaged website visitors that is targetable.

Then, I could create a new piece of exclusive content once per week. I would target this small group, using a frequency cap of 1 over the life of the ad set for that particular piece of content. Everyone would be shown that piece of content once. Then I’d create another piece, using another ad set set up the same way. Rinse and repeat.

Soon, I should have a better idea of how this could work. I’d know what size the audience could be and still run. I’d know how much it would cost to reach all of them (or close), and how long it would take to pull that off. And that could give me the structure I need.

There’s still plenty that needs to be answered throughout these experiments, but the ideas they have generated already are pretty awesome!

If you want to get more tips served to you, you’ll need to first qualify! The next threshold to hit is viewing at least 12 pages of my website in 180 days.