I’ve had Facebook Timeline ever since it became available to “developers.” I updated my background image and also have found it useful when wanting to recall facts from the past. For example, my 10-year-old son just won the spelling bee for the second year in a row (kid’s a genius, right?), and I was wondering what his words were last year. Yep, I listed many in a status update. Found it quite easily.

But now that my Timeline is going to be available to more than just the small percentage of people who have activated it, I’ve decided to take a closer look at mine to make sure there’s nothing there that I would… you know… regret. And I’m also anticipating a potential flap when unsuspecting users discover their own stories from the past. I’m bracing for Timeline.

Now, to be clear: I use my privacy settings. Always have. But Facebook privacy was much less defined in 2007 and 2008 (though, I admittedly don’t recall what specifically was available then). So those are the years I was concerned about most.

For whatever reason, I only had wall posts in 2007. I think this is because we communicated mainly via wall-to-wall back then. Or maybe I deleted stuff long ago. I don’t know. It will forever be a mystery.

But here’s a wall post from a friend on October 22, 2007. Back when we were just kids and had no care in the world. Privacy? Pshhh…

Note that it is displayed for “Friends; except Acquaintances.” The “Acquaintances” list didn’t exist back then. Then again, wall posts make sense. When you change your global settings for wall posts, it applies to all of them. So my settings now are applied to the past. Okay, I get that… 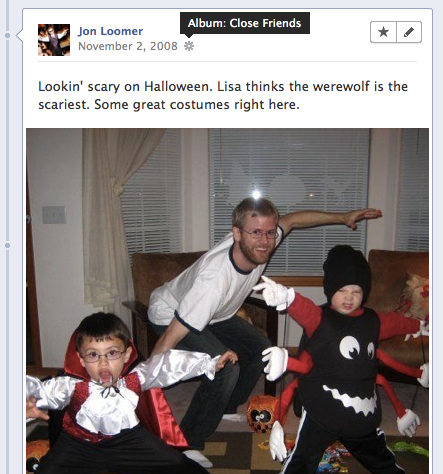 Once again, this is easy to explain. This photo exists in an album, and I’ve manhandled those privacy settings. But it’s still nice to know that this is handled appropriately.

So how about a status update I wrote in 2008? Really, this was the biggest concern.

So what do we conclude from all of this? Well, I’m only one person. Maybe I have done some appropriate things over the years that protected me when my profile was converted to Timeline. Or maybe this is a sign that Facebook is taking some precautionary steps with old content that was created prior to the existence of some of the more advanced privacy settings. I’m sure this will become clearer in the coming days.

What are you seeing? Are there old items that need to be adjusted, or have they been mysteriously adjusted for a small audience for you?