I’m at the AllFacebook.com Marketing Conference in New York. Day 1 was packed full of great info. I admittedly have never been a great note taker (some habits you just can’t break), but luckily AllFacebook.com provides a recap of several of the sessions. 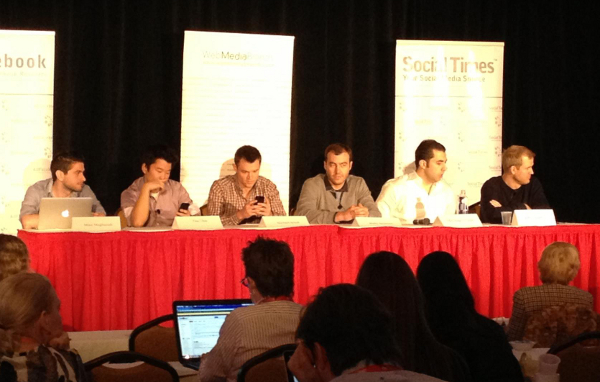 Vendor Workshop: 6 Secrets to Make Your Facebook Page Stand Out from the Rest
Speaker: Emeric Ernoult, Founder and CEO of AgoraPulse

There were other other panels as well, but I unfortunately don’t have recaps of those. My favorite of the day was by Jeff Ferguson, who wrapped up the day comparing baseball sabermetrics to Facebook marketers focusing on the right stats. That’s right up my alley!

Here are a few highlights and quotes from the day…

Eric Ludwig dropped a bomb, saying that the average lifespan of a Facebook Fan is 25 days. Not that they unlike the Page after 25 days, but that they disengage after that point. Take advantage of those first 25 days!

He also discussed the impact of Facebook marketing. While he said it rarely results in a direct sale, it is successful for…

Ludwig, on the importance of Sponsored Stories:

For me, it’s that advertising is changing forever. The days of a brand trying to align themselves with a creative agency that creates something like the Geico gecko or the caveman … those days are mostly over. … The most important thing is what customers are saying about your brand. There’s not a single ad that I’ve written that has out performed a sponsored story ad.

Photos get two to three times more engagement than regular status updates. When you’re on your phone scrolling down your news feed and you see a photo that’s vibrant, you click on it and expand it.

Chae on the News Feed:

The Facebook news feed is a one-way interaction — just because you stalk your ex-boyfriend, your ex-boyfriend isn’t necessarily going to be seeing your content, although you will see theirs.

The greatest secret of Facebook and how to hack the Facebook news feed: Take one post and create 24 targeted and segmented posts using what’s available from Facebook now — age and location. You’re posting at 7 p.m. for an 18-year-old male who’s in college and at 8 a.m. for a stay-at-home mother. Only one post was shown to that one fan, but your entire collective reach will increase three times.

Facebook spends a tremendous amount of time trying to serve the most important content to you, and it does an incredible job of it. The challenge is that 700,000 pieces of content are being created each minute.

You have to fail constantly. Start understanding what your audience responds to and continue to modify that.

Emeric Ernoult’s 6 Secrets to Make Your Facebook Page Stand Out from the Rest:

Kevin Ryan on looking beyond Likes:

Think of the brand first before you think of the rules of Facebook. Likes are absolutely spectacular, but it’s hard to draw a line between likes and revenue. Three essentials: Focus on learning while earning, prep for smart online media at scale, no device is an island We’re not mobile marketing anymore — we’re device marketing.

That’s all I’ve got! Check back in for the December 5 recap.