The answers to both questions are surely different for each person and each business. But I wanted to provide you with the results of what I’m finding on one of my websites.

The subject to be analyzed today is my baby, Brewers1982.com. It is a collection of recaps, commentary, statistics and photos from the historic 1982 season of the Milwaukee Brewers. The site has been active for a little over a year and content is updated at least once per day (during the season). The promotion comes largely from my Twitter and Facebook accounts, though I also use Google+, Stumbleupon, Reddit, LinkedIn, Digg and a few others. But most of my traffic is direct, from search engines or from either Facebook or Twitter. 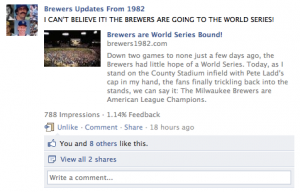 Brewers Updates From 1982 on Facebook has been live for over a year. It currently has over 1,300 “likes” and has had over 1,000 for the past several months. I update this page every time there’s a new article on the site, at least once per day. So most items I share are articles with thumbnail, title, description, etc. I don’t automate this so that I can add my own comments to the post.

I occasionally will add a status update or a Facebook Question, but the majority of posts are sharing links. I’ll also share from my personal Facebook account on occasion. I should note that I also use iFrames to display 1982 Brewers baseball cards from the site, so that also generates some limited traffic.

The most promotion effort occurs on Twitter. @TweetsFrom1982 is the main account, around which the website is based. It has over 1,000 followers, and has had between 600 and 1,050 for the past six months or so. The account is updated frequently as the 1982 Milwaukee Brewers season is retold “in real time.”

I do use Twitterfeed to automatically post new article links from this account. However, I will also tweet these at least one more time per day manually with a unique description.

Additionally, I run @BrewCrewLive (approximately 3,000 followers) and @PastKast (78 followers). @BrewCrewLive mainly covers the current Brewers, and is an extremely active account. I use automation (bringing in recent articles from around the web) and update it manually. It has a Klout score of 61. @PastKast is admittedly a robot account that only updates via Twitterfeed my new articles. So the reach is limited.

In either case of @BrewCrewLive and @PastKast, I generally only promote my Brewers1982.com articles once per day through Twitterfeed. There are some rare exceptions due to special occasions.

So between the three Twitter accounts, I promote a given article four or five times per day with a total reach of about 5,000.

Over the past 30 days, my incoming traffic is broken down as follows:

So we’re looking at the 21.7% in this analysis. Of the referred traffic, Facebook and Twitter make up more than 75%:

It’s a bit of an eye opener. Considering the efforts to drive traffic from Twitter, those links aren’t being clicked. But I put forth very little effort on Facebook, and I’m getting some good results.

Now, you can’t just look at number of clicks. We also need to consider quality of traffic. How long do these referrals stay on the site?

Not surprisingly, if someone is referred within the network (from PastKast.com, Brewers1987.com or another article on Brewers1982.com), the typical user spends a decent amount of time on the site:

Now, quality of traffic from Facebook and Twitter isn’t quite as clear. It depends on how they get to the site from those locations (in order of percentage of total referrals).

Pretty confusing results. Most of my referrals come from Facebook.com, but the average time on site is just under a minute (not real good — though they’re probably reading only one article). Second highest percentage is from Twitterfeed, but average time on site is terrible at 16 seconds. Yet, when referred with a t.co Twitter link shortener, they spend nearly two minutes on the site. Same with Twitter.com. But the two referrers combined account for less than half of the traffic Facebook is generating. And it’s countered by the poor Twitterfeed quality traffic.

I have a hard time explaining this discrepancy. I guess I can see why Twitterfeed would provide poorer results. I don’t create a manual message — it’s just the title of the article and the link. But the majority of my traffic comes from here, yet much better quality traffic comes through t.co and Twitter.com. I don’t use t.co, but maybe that’s from users retweeting. Either way… interesting and not particularly revealing at the same time.

Somewhat off the subject, but my traffic from Google searches results in more than double the referrers of Twitter, more referrers than Facebook, and an average of 43 seconds per visit (under Facebook and Twitter overall, but these are cold leads). Other than basic SEO, I do nothing to drive this traffic.

Taking all of this information into consideration, the effort I put in and the results I get out have an inverse relationship. My highest number of referrers are Google search and Facebook. I only do basic SEO and I simply share my articles to an audience of 1,300 on Facebook. Yet I cross promote and tweet from three different Twitter accounts for a reach over 5,000 throughout the day and get worse results.

Of course, these results do not apply to everyone. You may have better success with Twitter than Facebook. But I find that I get much better bang for my virtual buck (considering time is money) from Facebook than I do Twitter. At least when it comes to driving traffic.

How about you? What kind of results do you see from the two networks?

[Note: I used Brewers1982.com as my subject instead of this site since it is a much fairer comparison. Much of my subject matter on this site is Facebook, so that should resonate with my personal Facebook audience. Additionally, I don’t use Twitter as much personally as I do Facebook (and I use my personal accounts in either case to promote). My use of Twitter to promote Brewers1982.com is actually much more extensive than on Facebook.]