My voice trailed off and my body trembled as I finished the call. It was five years ago today, and I had been laid off.

It was the second time in two and a half years. The first time you could call a fluke. Something that could happen to anyone. But a second time? The self doubt creeps in.

I can guarantee you that there was no chance in my mind that I would be running my own business five years later. Not a thought that I could pull this off.

I want you to understand this. I doubted myself because I felt everyone else had it figured out. I believed them when they called themselves “gurus” and “experts” who perfected the path to prosperity.

I wish I knew then that many of those self-proclaimed experts were faking it. And even those who know what they’re doing have many moments every single day of self doubt.

No one snapped their fingers and created a business — their first business — without some embarrassing mistakes.

I’ve said over and over again that I really had no idea what I was doing in the beginning. I went months before making a penny from this website. And I was my worst enemy.

I feared mistakes. I feared failure. But you only fail if you don’t try.

In that spirit, it’s only fair that I share with you my five years of firsts. Some of this stuff is buried within these pages. Some of it is difficult — almost impossible — to find.

But it’s there. It’s funny. And I hope you find it inspiring!

Let’s take a close, painful and often hilarious look at my five years of firsts for this business… 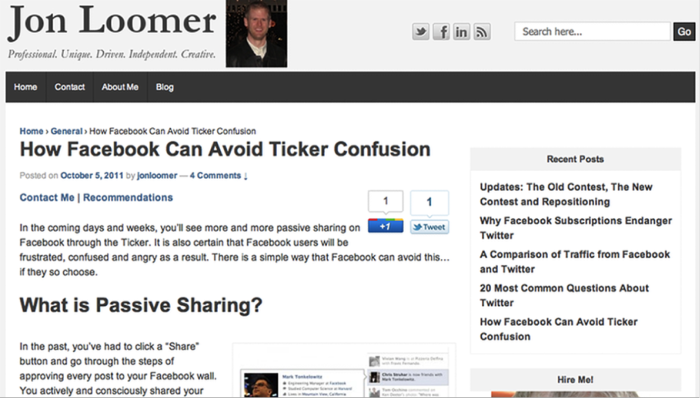 Looks pretty great, right? When I launched this website, I refused to invest a penny into it. It’s a free theme. I created that awful logo (more on that in a moment).

And guess what? It didn’t get any better from there for a while. In fact, it got worse. It wasn’t until April of 2012 that I finally discovered Genesis Framework, and I’ve been using it ever since.

When I launched this website, I thought it would be a good idea to create an artsy video to go on the home page. Brace yourselves. It’s painful…

Now, keep in mind that when I launched this website on August 29, 2011, it wasn’t to provide information on advanced Facebook advertising. Instead, my main goal was to get a job.

So I wrote this post to declare my free agency to the world. Even my writing style has changed in five years. 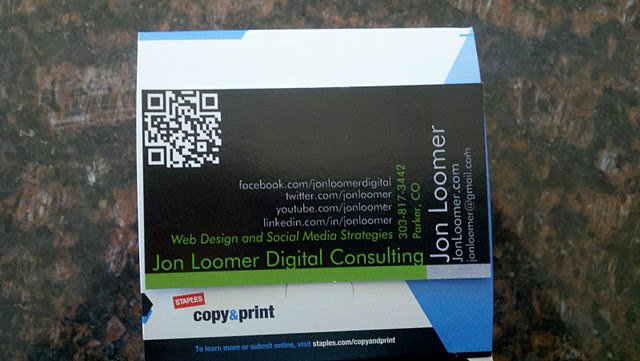 I remember deciding I was going to a job fair, but I didn’t have a business card to hand out. I quickly had one made at OfficeMax, and you know what? I was really proud of it.

Oh, man. But you know what? It didn’t get much better. I updated it in November to match those awesome pea green business cards…

You probably wouldn’t be surprised that in each case, I created these monstrosities. I am not a designer. Always hire a designer, kids. 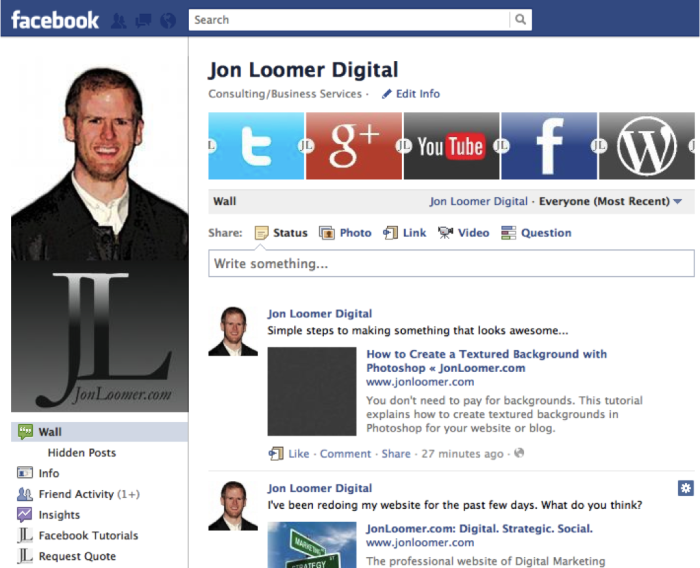 Remember when Facebook pages looked like that? Gotta love the crappy logo at the top left. The sad thing is that I’m pretty sure this wasn’t the first version. It was worse.

I didn’t create my Facebook page until early November of 2011. The reason I hadn’t until then was pretty simple: I didn’t believe that I was actually starting a business.

Oh, and I had a welcome tab. Remember those? Here’s the beauty I created… 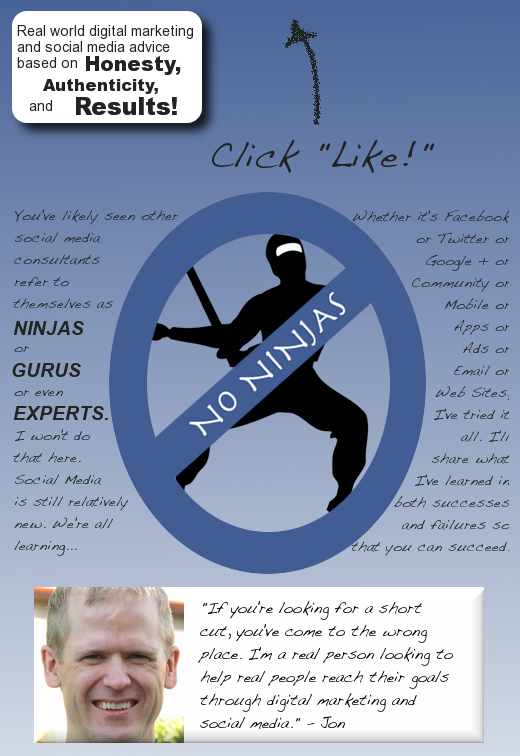 I even created a video about it. I’m sure you’d love to watch…

Two days later, I felt I had this Facebook page thing all figured out, so I wrote about The Anatomy of a Facebook Page.

In case you’re wondering what my first post was from that page. Not all that exciting… 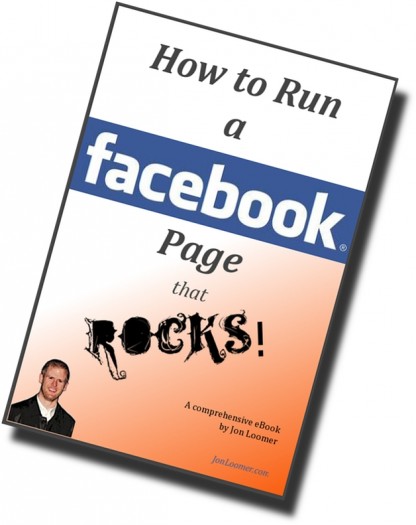 That’s right. I wrote an ebook called “How to Run a Facebook Page that ROCKS!” I did that. All me.

Once again, this beautiful design was all mine. I didn’t even have it connected to a CRM. Honestly, I may have been just giving it away by direct link. I was a genius.

I ran Facebook ads prior to my business, but the first ones I ran for myself promoted my Facebook page and first ebook. Back then, you could do the whole, “Like my page to get this ebook” approach.

Now, this is what Facebook says the ads look like. Of course, the format was different then, I would have had a different profile photo and I certainly didn’t have that many Facebook fans…

I’m sure you’d love to know how these ads did. I don’t know because Facebook doesn’t provide results from 2011. But I can tell you that the total spent on these two ads was $1.99.

I’m so happy I found this. I actually thought it was gone forever. I originally hosted podcasts locally here on the website, so when I moved to iTunes I didn’t migrate over the first episodes.

Well, I found the first episode and I just published it to iTunes. It originally aired on May 22, 2012, and it still has the same intro music.

Not a Pubcast yet. No beer. Bad audio. And I vividly remember being extremely nervous, having to re-record parts of it as a result.

On October 11 of 2012 — more than a year after I was laid off! — I launched my first product: Facebook Page Strategic Review.

I promoted it as being “A Trained Eye for a Small Price.” In other words, I was offering way too much for not enough money. Here is how I described the service, complete with a handy video…

For $97 (Limited Time Price), I will do a comprehensive review of your Facebook Page activities. After you complete a questionnaire that will provide me background on your goals and priorities, I’ll provide a one-page report and video screen-share with step-by-step observations and suggestions.

Once I receive payment, I’ll immediately send you a questionnaire to be completed to start the process. Within one week, you’ll receive a one-page report complete with a video review of your Facebook Page!

Did I mention that I tend to have a fear of public speaking? It’s getting better, but I still remember shaking while introducing myself at the AllFacebook.com Marketing Conference in NYC in December of 2012.

But that was just a panel. My first true solo speaking gig was at Social Media Marketing World in 2014. While I was nervous there as well, it went great! 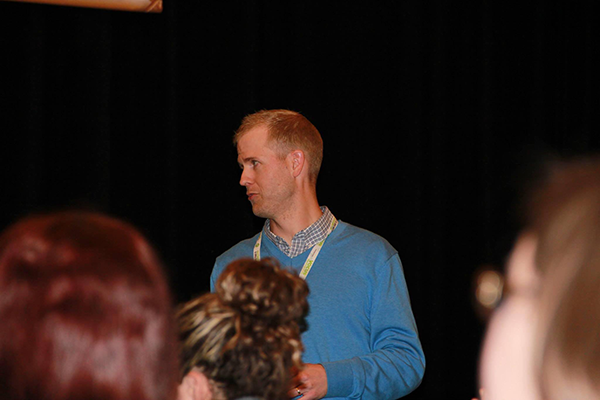 One of my New Years Resolutions for 2013 was to create more videos. Because as we saw above, that was going well!

So on January 4 of that year, I filmed my first video blog. Check out the sweet lighting by the end!

I’ve overcome it a bit these days, but I have always been petrified of the stage. And believe it or not, this carries over to things like videos, podcasts and webinars.

I recorded my first solo webinar (not someone’s guest) in March of 2013. You can watch it below…

And since you can also access the replay notes and slides here, I was clearly really good at list building and protecting this type of content.

Now, I’m sure I could spend all day sharing embarrassing firsts. But this is all I’ve got for now.

Here’s the deal: I’m glad each of these firsts happened. I did things that made me uncomfortable — that I wasn’t good at — and I learned valuable lessons from them.

Are there any business firsts that you can share that are a bit funny or embarrassing now? Let me know in the comments below!