A little under a month ago, I wrote a tutorial that explains how you can drive traffic to your website with Facebook’s Domain Sponsored Stories. Today I’m going to tell you about my early results so that you can learn from them and optimize your own ads.

Refresher: What Are Domain Sponsored Stories?

Very few publishers are using Domain Sponsored Stories. They need to be.

As a result, the ad generated is entirely focused on the friend’s activity. Here’s an example:

Since this content is entirely generated by a friend, they tend to be more trust-worthy to users and more likely to generate clicks. Note that the advertiser cannot choose which posts are promoted — or even promote shares of specific articles — so you are somewhat at the mercy of users.

The thing about these ads is that it’s not always clear who created them. While it’s likely this comes from my campaign, it’s always possible that Emeric promoted his own post.

You should consider using Domain Sponsored Stories if you are a publisher and rely on website traffic to drive your business. It’s a staple of my strategy since I constantly have one going along with a Page Like Sponsored Story at low levels to continuously drive growth and activity.

I’ve run five variations of a Domain Sponsored Story since February 4. The goal was to find the most efficient way to drive traffic to my website. In other words, I was looking for the lowest cost per action (in this case, that action is a link click).

The only differences between the five variations I created were the placements and bid type. Four of the ads were Optimized CPM:

Optimized CPM is supposed to target people most likely to perform your desired action. As a result, the CTR is usually higher, but the CPM typically is as well.

I almost always will run a regular CPM ad as well because I’ve found that in some cases I am actually able to spend less per action this way due a lower CPM.

So in this case, I ran a variation of this ad that focused on News Feed only but utilized the CPM bid model. I generally kept my max bid between $3 and $5. You cannot set a bid for Optimized CPM.

I spent a total of $140.64 on this campaign. Not a lot, but enough to spot some trends. Note that I never did get enough impressions out of the Optimized ad for Desktop Only, so I’ll essentially ignore that ad from here on out.

It’s Not All About CTR

I first found out about Domain Sponsored Stories from an article by PageLever. They wrote about how they got a Click Through Rate of close to 10%.

However, I quickly realized that it’s not all about the CTR. Since my CPM for the Optimized ads was so erratic (sometimes exceeding $10.00), I started focusing less and less on this metric.

For example, my most successful ad according to CTR was the Optimized unit targeted at the News Feed only. That ad generated an average of a 5.261% CTR. I spent a total of $51.34 on this variation, generating 220 actions.

If you do the math, you know that this comes out to $.23 per action. It was my second to least efficient ad variation.

Here is a chart that lays out the CTR and Actions Per Impression for each ad type. Based on this alone, you’d expect that my Optimized ad focused on News Feed only was most effective. 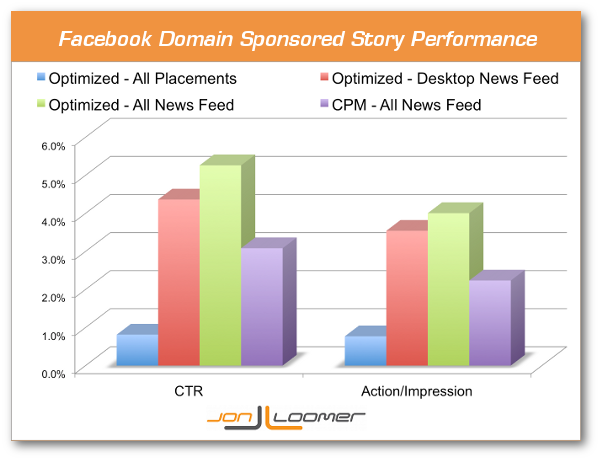 My most efficient ad ended up being the CPM variation that targets all placements. It could have been easy to miss how effective this ad was based on peripheral numbers (that most marketers focus on too heavily).

The resultant Cost Per Action:

The interesting thing here is that the two “most effective” ads according to CTR ended up being the least efficient. My CPM ad was clearly the winner here.

Here is a chart that compares CPM and Cost Per Action. 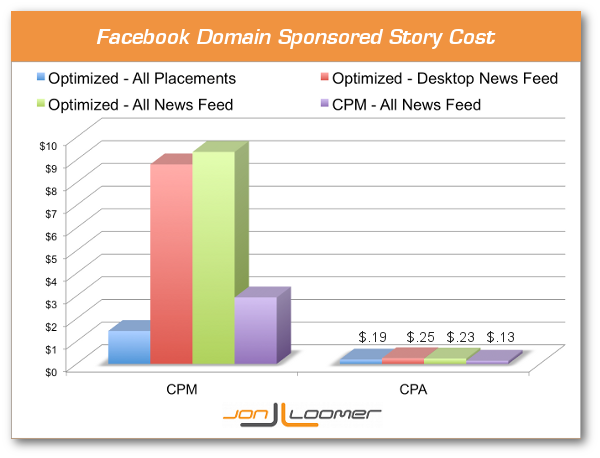 Now that I know my CPM ad is most efficient, I’m going to keep on tweaking it to see if I can continue to get the cost down. I’ll do this by expanding the interests targeted and then creating variations based on placement. My hope is to get the cost below $.10 per action.

I was able to get my cost per link click down to $.13. I’ve determined that this is a price I’m willing to absorb because traffic and exposure are so important to my business.

I’ve been able to get a lower cost per click on Twitter ads, but I’m not able to separate “link clicks” from clicks on hashtags and my profile name. So it’s not clear just how efficient those ads are.

Cost per click will tend to be much higher on Google (based on my limited experiments there), but of course those tend to be targeted clicks that could lead to business. The disadvantage of Domain Sponsored Stories is that you can’t isolate the pages shared and people sharing for your promotion.

Are link clicks worth $.13 for your business? That’s something you’ll need to figure out on your own. But I’d love to hear your thoughts below!