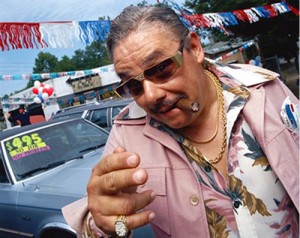 Please. Don't be this guy.

When I was a kid, I could never lie my way out of a sticky situation. I was a horrible liar. Couldn’t convince myself enough that a falsity was true to convince my parents or teachers that it was true. So I rarely tried. Just winced and took the punishment.

It felt like a curse at the time. It continued into adulthood. My wife jokes that she doesn’t have to worry about me doing anything behind her back because I could never cover it up. This is where I could joke about how I have her fooled, but, well… She’s right. I just wince and accept my punishment.

It’s why I always assumed I could never be a good salesman. I can’t look someone in the eye and tell them that my product is great if I know it’s terrible. I don’t even attempt to convince a potential client that they need my services if I know they don’t.

It’s why I can’t work for a company unless I’m passionate about what it does. I’ve been spoiled to have had incredible opportunities with the NBA and American Cancer Society. So spoiled that after two months of looking for a job I threw up my hands and said screw it. I can’t do it. I’m working for myself.

A curse? Maybe not.

I’ve been realizing something more and more lately. There is a negative association between sales and dishonesty, but the truth is that they aren’t necessarily interconnected. We may perceive bad salesmen in this light, but good ones are honest.

Oh, sure. They exist.

Good salespeople don’t sell you something. They serve you. It may not immediately lead to a sale. But it creates a relationship that may eventually lead to many sales. And if not, that’s okay, too.

Social media is the same way. It’s easy to negatively associate self-proclaimed social media gurus or ninjas with dishonest tactics. They are idiots. They are after shortcuts and a quick buck. And they’ll look you in the eye and lie to your face.

But those people are easy to pick out. And they don’t last.

When I decided to go out on my own and start my own business, I was often asked what set me apart from the rest. There are thousands of supposed social media experts out there. They all promise to bring your Facebook page 10,000 fans, make your website rank first in Google searches or get you 50,000 followers on Twitter.

What they won’t tell you is that they’ll buy Facebook fans, use black hat SEO tactics and follow 50,000 bot accounts on Twitter to get those hollow numbers. They mean nothing. But they’ll sell you a lie.

And that’s how I’m different. I don’t make dishonest promises or guarantees. I want to help you reach your business goals with the help of digital tools. And you can do it while retaining your dignity.

True social media success is based on three things:

If you aren’t transparent, your customers will hunt you down. If you are dishonest, they will never buy from you. If they do, they won’t be repeat buyers. If you aren’t authentic, they’ll sniff it out.

With social media, you don’t need to put on a PR show. Your customers don’t expect you to be perfect. And if you attempt to be perfect, if you deny your imperfections and refuse to accept accountability, customers will revel in burning you down.

Be human. Show that you have a pulse. Do everything you can to serve your customers. Ask about them more than you tell about yourself. Admit your faults and make them right. Have fun. Your base of customers will be infinitely more loyal as a result.

It’s why I’m starting to realize I might not be such a terrible salesman after all. Sure, I’m not making a quick buck right now. I’m barely making any bucks. But I’m honest. I have my dignity in tact. And I’m serving instead of selling.

Eventually, that may just lead to something.